Mechanization is clearly one of the best solutions to reduce labor requirements for vineyard management and lower production cost. Even though pruning machines are extensively used in wine grapes grown in the San Joaquin Valley, the mechanization of pruning in table grapes remains challenging.
Most of the table grape vineyards grown in the San Joaquin Valley use a “Y” trellis system (open Gable system). This highly structured trellis provides adequate support to large canopies of table grapevines but limits the options of mechanization. In addition, table grapes have high aesthetic requirements. Growers rely on vineyard crews to adjust the location and numbers of spurs and canes at pruning to maintain vine shape and achieve desirable yield and fruit quality. In this regard, mechanical tools that are currently available cannot mechanize the entire pruning process in table grape vineyards. However, mechanizing part of the process is possible.
Cane pruning, spur pruning and spur pruning with kicker canes are used in table grape vineyards, and the choice of method is based on basal bud fruitfulness of specific varieties and growers’ preferences. Despite the difference in pruning methods, there are three general steps involved, including 1) selecting canes and cutting canes to desirable length; 2) pulling pruned canes off the catching wires and placing them between rows; and 3) tying canes or new cordons to the wire.
Mechanization has the potential to improve efficiency in the latter two steps. Andros Wye trellis pre-pruner (Andros pre-pruner) snaps canes and removes part of the wood materials before workers cut canes to spurs (Figure 1). KLIMA cane pruning system (KLIMA shredder) strips canes from the wires and mulches them after an initial pass of cutting canes (Figure 2). Battery-powered shears are alternatives to conventional hand shears, expected to reduce the fatigue of workers and lower the risk of repetitive motion injuries (Figure 3). Battery-powered tying machines simplify the tying process and may reduce the time needed to tie individual canes.
Despite the promising outlook of mechanical pruning tools, more evaluation is needed on their suitability in different training systems and whether mechanization can decrease labor requirements for pruning. Thus, as supported by the California Table Grape Commission, we evaluated those four mechanical pruning tools in four different table grape vineyards in 2022 between January and March.

KLIMA Cane Pruning System
We evaluated the KLIMA shredder in a spur-pruned ‘Holiday’ vineyard and a cane-pruned ‘Autumn King’ vineyard. Self-releasing clips were installed on the “V” cross arms in both vineyards prior to the evaluation (Figure 4). Those clips allow the shredder to directly pull catching wires from cross arms without human assistance. In each vineyard, 7 to 10 continuous rows were hand-pruned, and the adjacent 7 to 10 rows were pruned using the adjusted procedure.
On the first day, workers cut canes to desirable lengths without pulling pruned canes off the wire. On the second day, the KLIMA shredder was hooked to a tractor for passes in the vineyard. In each pass, the shredder caught the catching wires, releasing them from crossarms, stripped canes from the wires and mulched those canes. A worker was assigned to guide the tractor driver. The time required for shredding ranged between 1.5 and 2 hours per acre. On the third day, workers replaced catching wires back to crossarms.
When the KLIMA shredder was used, the non-machine labor hours required to prune vines reduced by 26% to 34% (Table 1), leading to a savings of $150 to $200 per acre on labor costs. A greater reduction in labor requirement was observed in the spur-pruned vineyard than in the cane-pruned vineyard. It seems the KLIMA shredder conveys a greater benefit in vineyards where pulling canes off the wire takes similar or more time than cutting canes. Indeed, we found that workers spent a similar amount of time on cutting and pulling canes in the spur-pruned vineyard. In the cane-pruned vineyard, on the other hand, workers used 65% of the time on cutting canes and 35% of the time on pulling canes.

Andros Pre-Pruner
We assessed the single-head model of Andros pre-pruner in the spur-pruned ‘Holiday’ vineyard that was used for KLIMA shredder evaluation. Ten continuous rows were pre-pruned and then hand pruned. The adjacent 10 rows were hand-pruned. Andros pre-pruner covered one acre in an hour, leading to a 10% decrease in non-machine labor required for pruning (Table 1). The reduction of labor requirements resulted in a savings of $40 to $80 on a per-acre basis. Given the trellis configuration of the experimental vineyard, the cutting system was placed 20 to 25 inches (51 to 63 cm) above the cordon to avoid the cutting system hitting the horizontal bars of crossarms. In vineyards with larger “V” crossarms, the cutting system can be placed closer to the cordon and thus a larger portion of the wood materials can be pre-pruned. In this case, the cost savings reached $120 to $130 per acre. In addition to cost savings, workers suggested benefit on their end; it was easier to pull canes off when they were pre-cut. 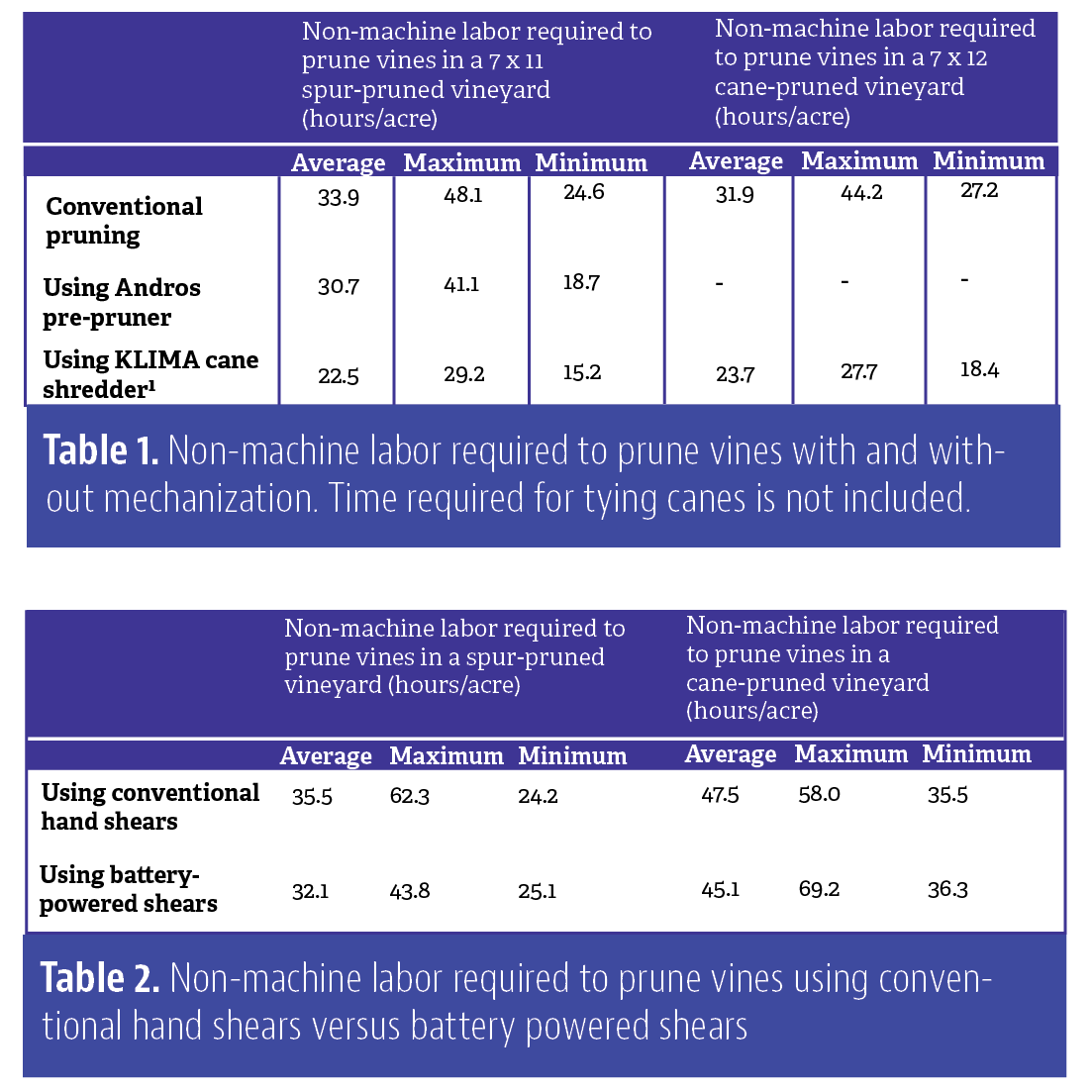 We also examined battery-powered pruning shears and tying machines in a cane-pruned ‘Autumn King’ vineyard. The use of tying machine allowed workers to tie five to nine more vines per hour than manual tying, improving tying efficiency by 15%. However, battery-powered shears did not improve pruning efficiency, even though workers felt more comfortable making difficult cuts when using those shears (Table 2).
Growers and the manufacturer observed a larger decrease in labor requirements when battery-powered tools were used under similar conditions. We suspect workers who participated in the trial did not fully adapt to the new tools, given that they only practiced for a day prior to the evaluation. We plan to perform more evaluations on those tools in 2023.
Mechanization of pruning can effectively reduce labor requirement and improve efficiency. Depending on the trellis configuration and production scale, growers could save $40 to $200 per acre by adopting mechanical pruning tools. Besides cost savings, pruning mechanization conveys benefits in other aspects. For example, workers could pull off pruned canes more easily after pre-pruning. KLIMA shredder shreds canes in pieces smaller than regular ground shredders, allowing wood materials to break down faster. The quality of cuts and ties improves when battery-powered tools are used.
We truly appreciate the support from table grape growers in Tulare and Kern counties, Pellenc America Inc. and Andros Engineering. This project is funded by the California Table Grape Commission.
Please contact Tian at titian@ucanr.edu for more information.