California red scale, Aonidiella aurantii, is one of the primary insect pests of citrus crops in California and other states where commercial citrus is grown. Originally native to southeast Asia, it is believed to have arrived in California between 1868 and 1875 and is now distributed worldwide. California red scale (CRS) is a cosmetic pest of fruit that can result in costly economic damage due to downgrades at the packinghouse. In addition, infestations of leaves, twigs and branches can cause overall negative impacts to plant health. As a result, reliance on insecticides has been historically necessary to mitigate damage caused by this pest.
During the last half of the 20th century, CRS control relied on the use of broad-spectrum insecticides in the carbamate and organophosphate classes. By the late 1990s, these chemistries were no longer effective in many orchards due to the development of insecticide resistance. In the early 2000s, additional chemistries came to the market and proved valuable to aid in managing CRS. These newer-generation insecticides, based on insect growth regulators, proved effective for several years.

Unfortunately, there were still a limited number of insecticide modes of action available for control, and by 2006, resistance to one of the primary insect growth regulators (pyriproxyfen) was confirmed in CRS populations in the Central Valley of California. An integrated pest management approach is necessary to maintain effective control of CRS and extend the lifespan of the remaining available insecticide chemistries.
The foundation of integrated pest management (IPM) programs for CRS includes biological control, cultural practices and judicious use of selective insecticides as needed based on monitoring and treatment thresholds. There are effective biological control agents for CRS, including multiple parasitic wasps and general predators. Unfortunately, necessary insecticide applications for the invasive Asian citrus psyllid have reduced the impacts of these natural enemies. More recently, mating disruption has emerged as a fundamental component of successful IPM programs and does not adversely affect natural enemies. Incorporating each of these IPM approaches will benefit growers by reducing crop damage and mitigating further insecticide resistance development.

California Red Scale Biology
California red scale typically has four to six generations each year in California depending on growing region and environmental factors. Adult females are sessile and attached to the plant surface, and each produces on average 100 to 150 crawlers. The crawlers are mobile, however longer distance dispersal of crawlers is often due to wind, birds, equipment, or orchard workers. Adult males are the only life stage with wings and capable of flight. Males are extremely short-lived as adults, living approximately six hours, and their only purpose is to locate females for reproduction. Mate location is facilitated by a sex pheromone emitted by adult female scales.

Mating Disruption for CRS
Mating disruption for CRS is a technology that utilizes the insect’s sex pheromone as a management tactic to interfere with the ability of males to locate females for reproduction, thereby reducing pest populations and crop damage. This technology has been commercially available in California since 2016, and adoption is increasing each year as positive benefits are observed.
A recent publication by leading University citrus researchers summarized a multi-year study demonstrating the efficacy and value of CRS mating disruption in California’s Central Valley citrus production. These studies used the commercially available CRS mating disruption product CheckMate CRS dispensers at the label rate of 180 dispensers/acre. The research team, led by University of California citrus specialist Elizabeth Grafton-Cardwell, concluded several key findings as a result of their 2016-19 studies in 12 commercial citrus orchards.
Significant reductions in pheromone trap capture, twig and leaf infestations and infested fruit were consistently demonstrated where CRS mating disruption was applied compared to non-mating disruption reference plots. Suppression of male capture in pheromone traps, an indicator of effective mating disruption, averaged 90%. Twig and leaf infestations were reduced by an average of 75%, and the percentage of highly infested fruit at harvest was less than 0.5% in 9 of the 10 mating disruption blocks in 2018 and 2019.
Summary conclusions within the publication state, “mating disruption using CheckMate CRS can be an effective method to reduce California red scale populations throughout the four-plus generations that occur in central California,” adding that “mating disruption has the potential to reduce or eliminate pesticide applications.” It is important to note that the decision to reduce or eliminate any inputs in the overall IPM program should be determined on an individual basis based on grower and crop adviser consultation.

Implementing CRS Mating Disruption
In general, there are three primary types of mating disruption products or delivery methods. These include vapor dispensers (also called passive dispensers), aerosols and sprayable microencapsulated formulations. The type of delivery method or product that is most effective for a given pest will be based on the pest’s biology and flight behavior as well as the architecture of the cropping systems (i.e., orchard, vineyard or field canopy structure). For example, aerosol-style mating disruption products have been used for many Lepidopteran pests, including codling moth and navel orangeworm in orchard crops for several years. Vineyard crop systems are effectively battling vine mealybug with sprayable formulations or vapor dispensers. Vapor dispensers have also been particularly effective in citrus crop systems to reduce California red scale.
The distribution of very small pests, like CRS, is often aggregated in the environment with distinct hotspots. Males are not strong fliers and tend to stay within the tree canopy when searching for mates. This is different from moths, which are stronger fliers and spend more time flying within the orchard rows in search of mates. Because of this, the current high-density vapor dispenser is the most effective pheromone delivery method for disrupting mating of CRS. Aerosols in their current configurations, which are highly effective for moths, are not as effective for pests like California red scale and vine mealybug (VMB) because of these biological and behavioral differences. Sprayable microencapsulated formulations can be thought of as billions of microscopic dispensers and are therefore also effective mating disruption delivery systems for pests like CRS and VMB.
California red scale mating disruption with CheckMate CRS is designed to consistently permeate the orchard environment with the insect’s sex pheromone precisely within the tree canopy where the pests are located. They are applied at a rate of 180 per acre by hand from the ground. Because of pest biology and where populations are most abundant, dispensers should be placed within the tree canopy and not on outer branches. Deployment patterns are based on row and tree spacing and total number of trees per acre.
Common row and tree spacing patterns are available on the manufacturer website (Suterra.com) and the manufacturer field team is available to assist with designing dispenser patterns for orchards with other spacings. When possible, dispensers should be placed after pruning, or if before, care taken not to prune out the current season’s mating disruption dispensers. The controlled release of pheromone lasts a full calendar year. Therefore, precise deployment timing is not critical. Many users choose to re-apply their CRS mating disruption dispensers before the historical first or second flights each year.

Benefits of Mating Disruption in the Overall IPM Program
In addition to the validated efficacy in reducing CRS populations and damage, incorporating mating disruption into the overall IPM program for any pest provides additional benefits. Pheromone mating disruption is non-toxic; it does not kill anything.
Its efficacy is based on interfering with reproduction, thereby preventing significant portions of subsequent generations from ever existing. This allows all other inputs (cultural, biological, chemical) to have greater impact, simply because there are fewer individuals to have to kill or remove from the environment. This technology is safe for non-target species (natural enemies, pollinators, humans) and is MRL exempt.
Mating disruption is not subject to resistance development and may help delay insecticide resistance due to reductions in the number of insecticide applications needed for effective CRS control. Dispenser-based mating disruption for CRS has zero re-entry interval, zero pre-harvest interval and is approved for use in organic agricultural production. 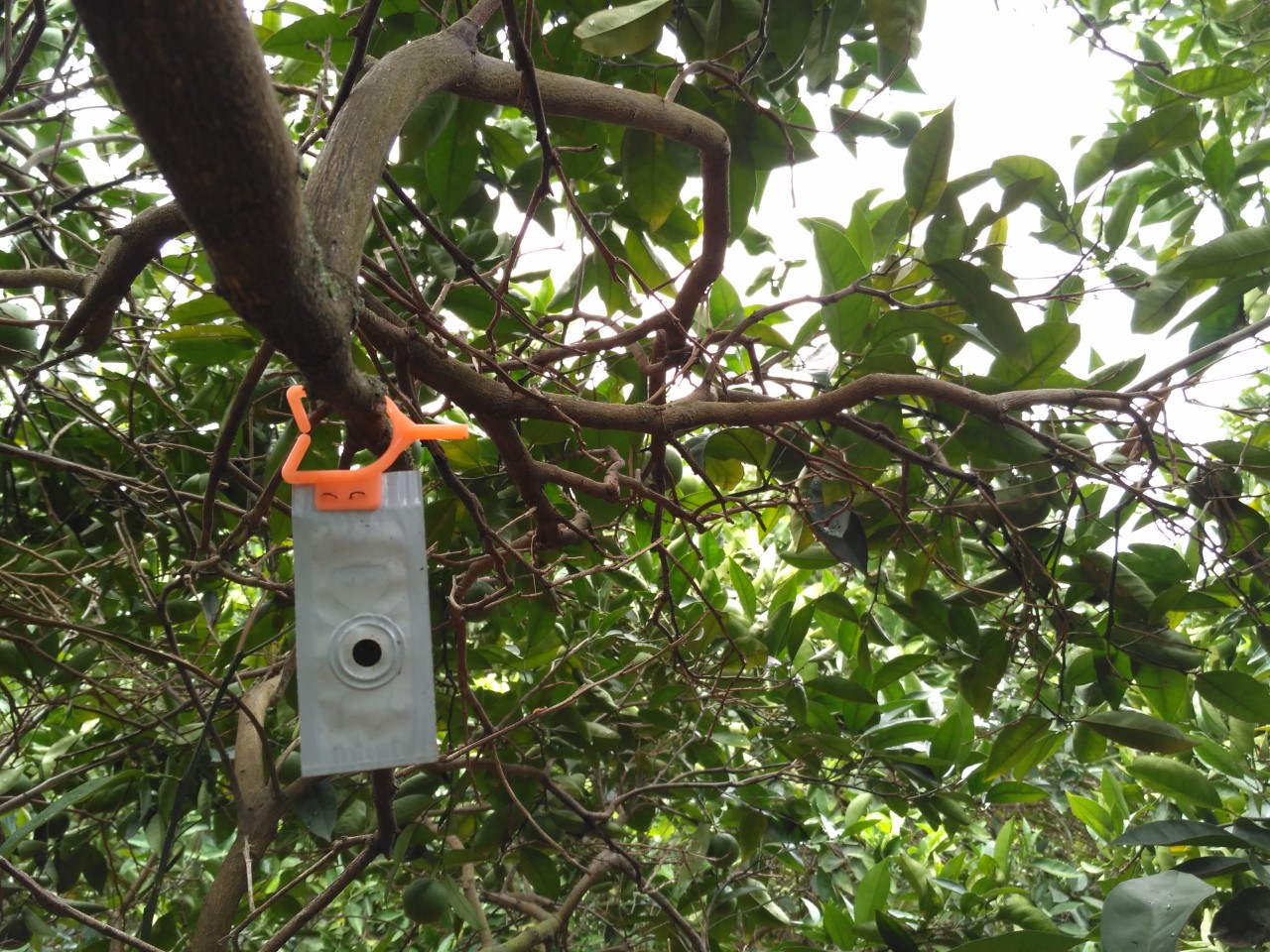 Areawide Management for Navel Orangeworm: Learning from the Past