The California Central Valley supplies 80% of almonds globally, so ensuring the health of these trees is essential. However, young trees are highly susceptible to damage from phytoparasitic nematodes, and chemical fumigation is often necessary to ensure protection. Rory Crowley, a conventional almond and walnut grower, partnered with the Simmons lab at UC Davis to find a natural, sustainable yet effective alternative to chemical fumigation.
“Any thoughtful producer in the Central Valley, whether organic or conventional, understands that we simply cannot continue farming the way we are, especially as it relates to traditional chemical fumigation,” Crowley said. “Indeed, as Dr. Amélie Gaudin has recently said, ‘An entire consortium of scientists has argued for years that our current ways of farming simply cannot go on.’ So, we decided to go with something new.”
Researchers in the Simmons lab, working in collaboration with the UC Davis Western Center for Agricultural Safety, specialize in biosolarization, a soil amendment technology that combines biological, thermal and natural chemical control to reduce plant diseases without fumigation. Biosolarization also provides a closed-loop recycling strategy for agricultural waste streams like almond hulls and shells. These byproducts provide valuable soil amendments due to their high organic carbon content and are co-located with almond orchards.

Implementation and Principle
With current technology, three components are necessary for biosolarization:
Soil Amendments: The addition of organic matter (OM) increases the population and activity of beneficial saprophytes (detritus-eaters), which can suppress pathogenic organisms through competition or through the production of biopesticidal chemical compounds. Agricultural and food processing residues act as low-cost soil amendments for biosolarization.
Transparent plastic tarp: Covering moist soil with a clear tarp promotes soil heating through the greenhouse effect. During hot summer months, covered soil can reach surface temperatures over 120 degrees F, temperatures which are lethal to many soilborne pathogens and weed seeds. Elevated temperatures can also leave pathogens more susceptible to biopesticides.
Drip line Irrigation: Irrigation using temporary surface drip lines beneath the plastic tarps fills soil pores, reduces oxygen and hinders gas exchange. When the carbon-rich soil environment becomes anaerobic, fermentative bacteria (Bacilli and Clostridia) can rapidly convert carbohydrates from amendments into toxic organic acids and volatiles.
These three components act synergistically and can provide positive feedback loops. For instance, high microbial activity stimulated by amendments can consume the limited soil oxygen and produce heat as a byproduct. Similarly, the application of amendments and irrigation can change thermal properties of soil and increase solar heating. Because of these combined factors, effective biosolarization treatment durations can be as short as 10 days or less.

Pre-Plant Orchard Demonstration
Rory’s 8.5-acre almond block in Chico was used as the demonstration site for pre-plant orchard biosolarization in June 2017, and trees were planted the following January. A hull-rich waste stream and a hull and shell mixed waste stream from a local nut processer were selected as soil amendments.
Residues were applied to plots at a rate of 15 tons per acre and tilled to a depth of seven inches. Soil was then covered with transparent tarp and irrigated to field capacity. For comparison, additional plots were treated with solarization (tarped without amendment) or left untreated. Soil remained tarped for six weeks.

Nematode Control
Parasitic nematodes (lesion and ring) were detected in soils before biosolarization took place. After 10 days of tarping, nematodes in the first 12 inches of soil were below detection levels in biosolarized soils and nearly undetectable in solarized soils.
When tarps were removed after six weeks of treatment, rows underwent deep tillage in preparation for planting. This effectively reduced nematode levels in the upper 12 inches of soil across all plots regardless of treatment. However, two months after the tillage, reemergence was observed (albeit at low levels) for all but the hull-rich biosolarized plots. As a result, the timing of deep tillage should be considered as a possible complementary control measure. To avoid bringing viable phytoparasitic nematodes from deeper soil layers into the treated root zone, deep tillage should ideally be performed ahead of solarization or biosolarization.

Soil Ecology
Even before tarp application, the incorporation of almond hulls and shells enriched soils with saprophytic taxa (e.g., Bacilli and Streptomyces), demonstrating how amendments can ‘shift’ soil communities to promote organic matter degradation.
After six weeks of tarping, microbes associated with low-oxygen and high-heat environments became significantly enriched in biosolarized and solarized soils (e.g., Clostridia). These microbes can ferment the sugars in almond hulls to produce acetic acid and other biopesticidal chemical compounds.
These enriched taxa remained elevated in treated soils even two months post-treatment. This may indicate prolonged degradation of fibrous organic residues, which has been linked to long-term pathogen suppression due to continued biopesticide production. Some of the microbes identified in biosolarized soils have also been associated with improved soil and plant health outcomes.

Almond Tree Growth
During the first year, trees planted in previously-biosolarized rows seemed to grow slower than trees planted in untreated soils. This trend continued until the beginning of the third year, when growth rate appeared to uniquely accelerate in some treated rows. During the fourth year, no differences in growth rate were found between the control and biosolarized trees, indicating successful adaptation of the trees to the treated soil. In one instance, Nonpareil tree diameters were significantly higher in the shell-rich amended rows.
“To be sure, this was a complex project, but the purpose was to prove concept,” Crowley said. “We did that and more. 1After looking at the data, any balanced grower would say that those first two years gave us all a bit of pause. Trunk diameter on the treated row trees were smaller than the controls, yet not once did I think we were going in the wrong direction. I continued to trust Chris and his team, and I trusted the science. I continued to trust my eyes and nose when I smelled the treated soil over against the control dirt. Trunk diameters have now caught up, and in my opinion, will outpace the controls.”
The slowed growth rate of biosolarized trees during the first and second year followed by accelerated growth during the third year suggests that trees may take at least two years to adjust to disturbances caused by degrading residues, but this did not appear to impact long-term growth rates compared to control trees. This also shows the importance of a post-treatment remediation period before crops are planted, though lab studies found soils may recover faster when amendment particle sizes are reduced or applied at lower levels (about 4.5 tons per acre).

Canopy Health
To compare tree health between treatments and tree varieties, multispectral imaging was performed two years after planting and took place each year when the canopy was at peak vegetation. Multispectral imaging captures reflected wavelengths from the orchard to gather data relevant to crop health. For example, healthy vegetation with high chlorophyll levels reflects higher levels of green and near-infrared light than other wavelengths, so rows with more vegetation (and more chlorophyll) would have higher values for green-related metrics than rows with little or poorer vegetation.
Preliminary data have been promising. Certain biosolarized treatments had higher ‘green’ metrics (improved canopy reflectance and color properties) than control trees, indicating greater vegetation levels. However, this benefit was dependent on both soil amendment type and almond tree variety.

Yield and Ripening
Although we do not have yield and ripening data, we do have promising anecdotal evidence from Rory, who managed the orchard last fall during our second harvest. “I got a call from my shaker operator at Nonpareil harvest: ‘Rory, we’ve got a whole row of green nuts.’ I sped over there in my truck. Lo and behold, it was a biosolarization row(s),” he said. “I looked at the control next to it and realized those nuts were ready, dry and shaking off the tree well. When I looked at the biosolarization rows, the nuts were bigger and the quality, by all appearances, was that much better. The nuts were still maturing on the tree, and the overall health of the tree was markedly better. We will prove this out this harvest when we measure crop yield and quality against the controls.” 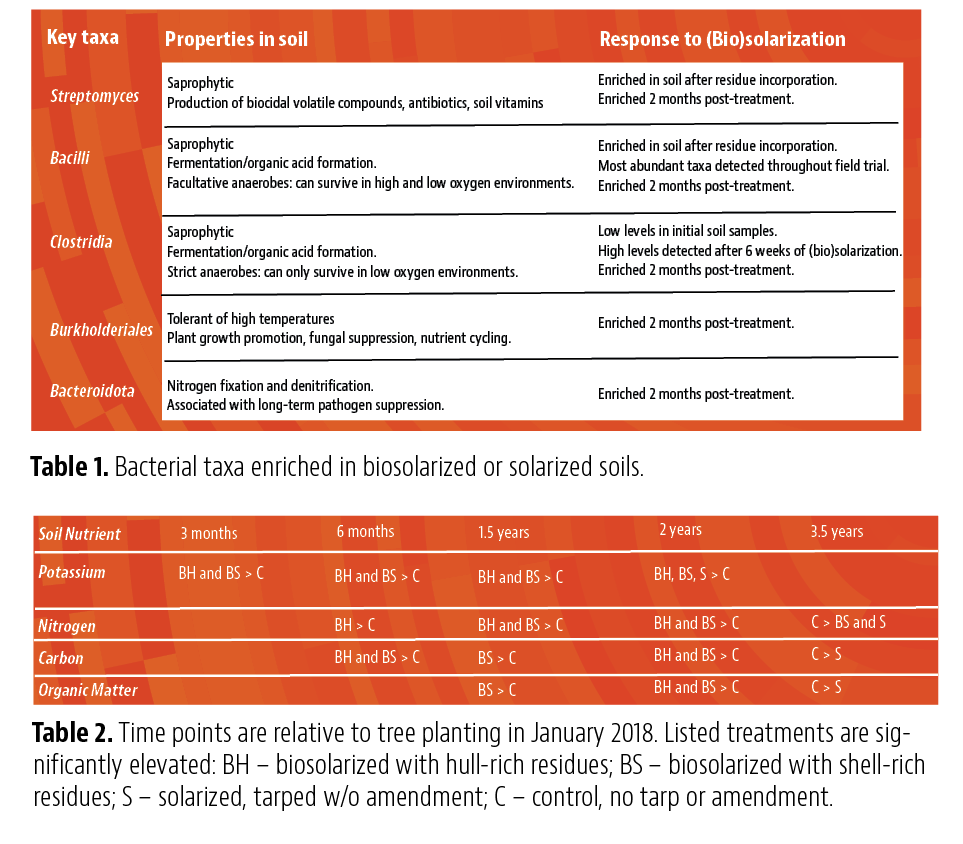 Conclusions and Recommendations
Both biosolarization and solarization are effective methods for the inactivation of lesion and ring nematodes in the short term, but biosolarization may have longer-term suppression. Effects at deep soil levels (greater than 12”) have not been fully investigated.
Soils treated with biosolarization have higher nitrogen, carbon, potassium and organic matter levels than nonamended soils during the first two years of growth. With fertilizer prices rising steeply, enrichment of plant nutrients in biosolarized soils may be an increasingly important driver for adoption for biosolarization over fumigation or solarization.
Trees may take two years to adjust to disturbances caused by biosolarization.
Growers should conduct trials on test plots before scaling up.
“This powerful alternative to chemical fumigation needs wide adoption, and Chris and his team deserve a huge kudos,” Crowley said. “Onward and upward to the wide adoption and full commercialization of biosolarization with almond hull and shell, and not just in almonds, but in all crops up and down the Central Valley.”
Research to translate biosolarization to almond production has been supported by grants from the National Institute of Occupational Safety and Health (grant #5U54OH007550) and the Almond Board of California (grants #17-SIMMONSC-COC-02 and Q18-BIO-18SimmonsC–0). The authors deeply appreciate the collaboration and support of George Nicolaus to establish the field trial on a Nicolaus Nut Company farm.