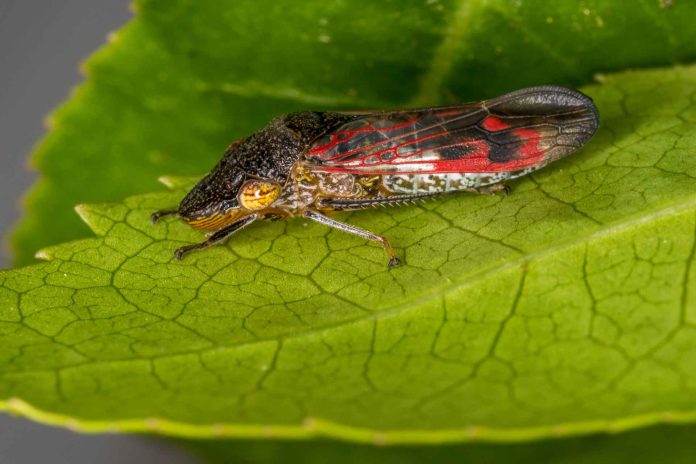 First known as Anaheim grapevine disease or California vine disease, Pierce’s disease (PD) has impacted California’s grape production since the late 1880’s. Grape growers had been losing vineyards to an unidentifiable disease, which prompted the US Government to hire Newton B. Pierce, the first United States Department of Agriculture (USDA) plant pathologist and namesake of the disease. Pierce had spent considerable time walking vineyards in Los Angeles, San Bernardino and Orange Counties where Muscat of Alexandria used for raisins and Mission and other wine grape varieties were dying at alarming rates (2). At the time, approximately 25,000 acres had been infected and or lost to an unknown “malady”. Pierce also spent time traveling to France, Italy and other Mediterranean grape growing regions studying plant disease symptom expression and declining grapevines to compare with those found in California. After researching all aspects of California viticulture production, including pests, diseases and associated symptoms, Pierce could never correctly identify the cause of California vine disease. For many years, a plant virus was thought to be the culprit of PD. It wasn’t until the mid-1970’s when University of California (UC) researchers isolated a bacterium from diseased vines. Once isolated, the bacteria were reintroduced to healthy grapevine plants that developed Pierce’s disease symptoms within 2-4 months (1). The bacterium is known to move from vine to vine with the help of insect vectors representing the sharpshooter (Cicadellidae) and spittlebug (Cercopidae) families. Infected insects ease of movement into a vineyard can be devastating in a few seasons when a PD susceptible grape variety is planted.

Although Pierce’s disease outbreaks occurred in California vineyards from time to time since being ID’d it was not a primary issue for the grape industry. Major raisin, table and wine grape growing regions had moved north into the San Joaquin and Sacramento Valleys and the central and north coast. The mild, southern California weather was the perfect environment for the pathogen, vectors and disease development. In contrast, the seasonality of the interior valleys and coastal grape growing regions seemed to result in a lower PD incidence year to year. However, there were PD “hot spots” located near riparian areas (i.e. Napa and Kings Rivers) or alfalfa planting that experienced significant vine deaths. Those hot spots were costly to individual farming operations but was not a concern for the industry. That changed when the disease/vector dynamics shifted.

In 1999, the nonnative PD vector, glassy-winged sharpshooter (GWSS), arrived in Temecula Valley. At that time a once thriving southern California wine industry was experiencing rapid vine death. GWSS turned out to be an effective vector and superior flyer when compared to native sharpshooters. Additionally, vineyards planted next to citrus proved to be a deadly combination. GWSS used citrus groves to feed, breed and for protection from potential predators from late fall to early spring. California grape growers were concerned about their future as they watched Temecula Valley vineyards die. As GWSS spread to other parts of California, PD became a much greater concern and problem. According to K.P. Tumber et. al (3) California growers are paying $56+ million in lost production and vine replacement annually.

Pierce’s Disease: Cause, Symptoms and Management

Cause of Pierce’s Disease

A gram-negative bacterium was found to be the causal organism of Pierce’s Disease in 1975 (1). Prior to Xylella fastidiosa being identified, it was thought that a virus was responsible for the demise of southern California vineyards. Newton B. Pierce, the diseases namesake, began researching the cause in the late 1880’s but never properly identified it as a bacterium.

Living in the xylem of grapevines, X. fastidiosa blocks the movement of water and nutrients throughout the plant. Once infected, the bacterium moves systemically from the point of infection to other parts of the plant. Early season symptoms can be confused with nutrient deficiencies (i.e. Zinc), displaying interveinal leaf chlorosis and stunted growth. Late season symptoms have a scorched foliage appearance resulting from the plants inability to move water through the xylem vessels. Young vines are more susceptible than older vines to infection and may die by the end of the season, while older plants may display symptoms over several seasons. However, when bacteria populations increase to a level that restricts significant sap movement, foliage and fruit will dehydrate and die. Geographical location, time of year and variety (Table 1) will determine how severe the symptoms become. As temperatures increase, fruit will shrivel, and green shoots mature poorly and never cure prior to winter. At this point, financial losses are expected to impact vineyard viability.

Pierce’s disease symptoms can often be confused with nutritional deficiencies, water related issues or other diseases. Multiple tissue samples should be shared with your pest control advisor (PCA), certified crop advisor (CCA), local farm advisor or university plant pathologist to correctly ID the symptoms. Once properly identified, a treatment plan can be devised to improve the vineyard’s health.

Management strategies will depend on several factors. Insect vector, grape variety and location will have a significant impact on the success of managing PD. The four main insects that transmit PD are the blue-green sharpshooter (Graphocephala atropunctata), native to coastal regions near riparian areas; the green sharpshooter (Draeculacephala minerva) and red-headed sharpshooter (Xyphon fulgida), native to interior valleys; and the glassy-winged sharpshooter (Homalodisca vitripennis), a non-native species to California and the most dominate vector of X. fastidiosa. It is important to monitor for sharpshooter insects if PD is to be managed. Sticky cards, sweep nets and visual observations of the vineyard and nearby properties will help in determining the population size and what control measures will be needed. Once identified, properly timed insecticide applications will help reduce the population. Vineyards located in areas where the PD bacterium is common, and temperatures are mild will be a challenge at keeping PD under control. In this case, identifying and managing the insect vector will be most important. If GWSS is the primary vector, insecticides will need to be timely to keep insects from moving into the vineyard. Citrus planted next to a vineyard will have to be sprayed as well to keep populations in check. Citrus should be visually checked for adults, nymphs and eggs. Visit the UC Pest Management Guidelines online for the most current insecticide management strategies (4,5).

Locations that have a history of PD should not be planted to highly susceptible varieties like Chardonnay if possible. Finding a more tolerant PD variety will improve the health of the vineyard. Newly developed PD resistant varieties have been released from UC Davis. These numbered wine grape selections (Table 1.) can be planted in areas with a high incidence of PD and used for blending with traditional varieties. Unfortunately, there are not any PD resistant varieties for raisin or table grape production, but research is ongoing.

Grapevines showing unusual foliar symptoms should be taken to your local UC Cooperative Extension office for identification. Plant tissue suspected of having Pierce’s disease can be sent to a diagnostics lab for positive identification using molecular tools. Leaf blades and petioles sampled from green portions of the cane in the late summer to early fall will give the best results. Vineyard insects should be caught and identified, too. A sweep net or sticky cards strategically placed in the vineyard can be used to survey insect populations in areas displaying foliar symptoms. Unique insects can be taken to your local Agriculture Commissioners office or the California Department of Food and Agriculture—Plant Health and Pest Prevention Services Division for identification.  These first steps are paramount for developing a management plan.