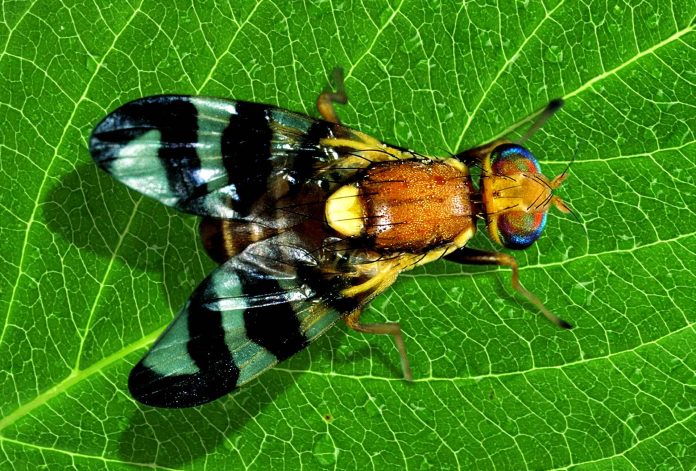 Walnut husk fly poses particular challenges for developing a truly integrated pest management (IPM) program due to the nature of its life cycle (one generation per year with a long emergence period) and lack of natural enemies. As a result, best practices for management rely heavily on monitoring and insecticide treatments. Precise timing based on monitoring method and rotation of chemistries to minimize resistance risk are keys to successful long-term control of this pest.

WHF Life Cycle
The life cycle and basic biology of walnut husk fly is fairly well understood (Figure 1). There is a single generation per year, with adult emergence historically beginning in early to mid-June and lasting through September in the Central Valley. In coastal areas, and recently some inland valley locations, emergence can be detected earlier, in mid- to late-May. Peak emergence is generally observed July through mid-August in most locations. Females must mate and develop eggs prior to the initiation of oviposition into the walnut husk, a period which averages approximately two weeks after emergence. Once eggs are laid, maggots emerge within approximately four to seven days, and feed on the husk for a typical period of three to five weeks. After this period, mature maggots drop to the ground and pupate in the soil. Most adults emerge the following year, but a portion of the population may remain in the soil as pupae for two or more years before emerging as adults.

Extended Emergence Period
The extended emergence period of the single generation of WHF, and significant differences in the timing of initial emergence, peak emergence, and end of the flight based on location, year, and other factors, have been the subject of much research. As opposed to some other key pests (e.g., codling moth), there is not yet a validated phenology or degree-day model available for growers and pest control advisors (PCA) to readily adopt to predict key WHF development and adult activity timings. Two recent publications out of University of California (UC) Berkeley (Emery and Mills 2019a, 2019b) investigated the effects of temperature and other environmental parameters on walnut husk fly development and timing. One study evaluated 18 years of historical trap catch data from 49 walnut orchards spanning the Central Valley to determine which factors most influence emergence timing and thermal requirements for development (degree days to emergence), with the goal of developing a phenology model that can be used to predict initial and peak emergence. Some of the factors evaluated included latitude, walnut cultivar, orchard age, winter precipitation, winter chill, and degree-day accumulation. While this model requires refinement for adoption by orchard practitioners (growers and PCAs), it represents a great step forward in improving our understanding of WHF developmental requirements to aid in our IPM program development.

Biological Control Agents
Biological control agents for walnut husk fly in California walnuts are virtually non-existent. The pest in general appears to have few natural enemies. Some reports from the state of Washington indicate that a predatory mite and anthocorid bug species have been observed feeding on WHF eggs, and some spiders and ants may feed on larvae and adults. In addition, chickens and other birds are said to be among the natural enemies of WHF. However, any naturally-occurring WHF biological control agents that may be found in walnut orchards are not known to provide any significant level of population reduction. Other mortality factors, particularly those that may impact the overwintering pupal stage in the soil (e.g., intentionally augmenting soil moisture, various cultivation practices, effects or augmentation of insect-parasitic nematodes or other microorganism populations, soil insecticide applications) have been explored to some degree with no specific recommendations or guidelines emerging as a result.

WHF Management Guidelines
In spite of some of these challenges for WHF management, guidelines regarding treatment timing and options are available, and when employed properly tend to provide adequate control of WHF in many situations (albeit with more insecticide intervention than may be desirable or sustainable in the long-term). Because WHF activity and population abundance can vary significantly from orchard to orchard (even those in very close proximity), site-specific monitoring is necessary to get the most effective results from insecticide applications.

Monitoring
Monitoring should begin earlier than the June 15 historical guideline (no later than June 1 in the Central Valley is the more recent recommendation). Some reports of late May catches in 2016 further support the “earlier-is-better” practice—there is little harm in counting zeroes for a few weeks. Yellow sticky card traps baited with ammonium carbonate lures should be hung high in the canopy (minimum 2 per 10 acres) in dense foliage on the north side of trees and checked two to three times per week. Each orchard should be monitored individually for WHF activity to best determine if and when to treat. A summary article regarding the efficacy of available traps/lures for WHF monitoring was published in 2014 (http://www.sacvalleyorchards.com/walnuts/insects-miteswalnuts/walnut-husk-fly-trap-and-low-volume-spray-study/).

Treatment Timing
Treatment timing can be based on one of three monitoring methods (the first two have typically been most effective).

Continued monitoring throughout the season is crucial. Short-residual insecticides plus bait will generally kill WHF for seven to ten days. Target subsequent applications at two- to four-week intervals based on the efficacy of the previous spray and trap catches. Clean traps the day after application and check three to four days later. If the number of flies drops to near zero, the spray was highly effective and a longer treatment interval may be used. If post-treatment catches increase or eggs are detected in trapped females, and the residual period of the previous treatment has elapsed, additional treatments may be required if harvest is more than three weeks away.

There are several materials effective against WHF, both for conventional and organic orchards. All materials aside from GF-120® (which contains its own bait) should be applied with a bait (e.g., Nu-Lure®, molasses, etc.). However, very high population orchards with extensive previous damage may require full coverage sprays (no bait needed) to achieve adequate suppression. Keep in mind that rotation of chemistries (based on the Insecticide Resistance Action Committee (IRAC) mode of action classification) is critical to minimize resistance development for pests that are treated multiple times each season. Proper aphid management can also help limit movement of WHF within and between orchards by reducing honeydew accumulation (a food source for adult WHF).

Emery, S. A. and N. J. Mills. 2019b. Sources of variation in the adult flight of walnut husk fly (Diptera: Tephritidae): a phenology model for California walnut orchards. Environmental Entomology 48: 234-244.