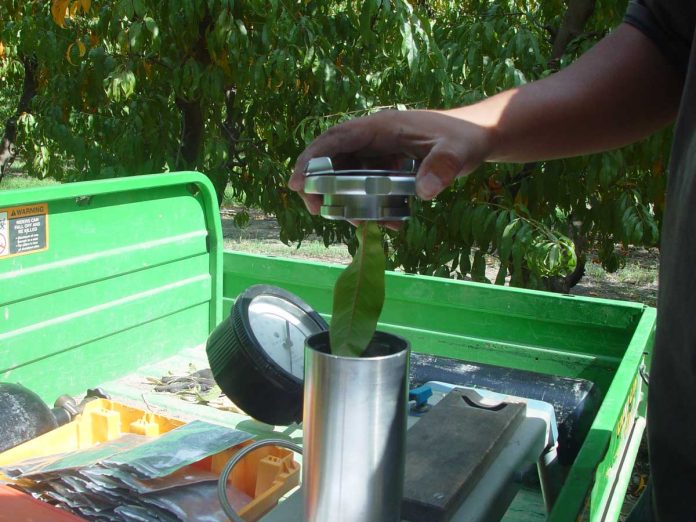 California has been in a historic drought and the lack of water has been a major problem for agriculture especially for crops that depend on irrigation. Deficit irrigation may be used in some cropping systems as a potential water saving strategy (Goldhamer et al., 1999). The term “Deficit Irrigation” simply means irrigating at less than the full amount required by crop evapotranspiration needs. For fruiting trees such as peaches, because fruit yield and quality at harvest may not be sensitive to water stress at some developmental stages such as during the non-fruit bearing postharvest season, there is an interest in applying deficit irrigation strategies. Deficit irrigation has not been widely used due partially to the lack of effective and fast methods of monitoring plant water stress in near real-time and determining associated risks of applying deficit irrigation. When crops are managed under deficit irrigation, the margin of error in timing and amount of water application becomes smaller before causing yield losses. Monitoring the soil and plant water status is more critical for reducing risks of a crop failure or permanent damage to the trees.  However, current established techniques of monitoring the soil and plant water status such as neutron probe readings of soil water profile and pressure chamber measurements of stem water potential are labor intensive, and lack the timeliness needed for irrigation scheduling purposes.

In a multi-year field study, an early-maturing peach was irrigated using furrow, drip, and micro-sprinkler systems under both full and deficit irrigation schemes. The trees were early-ripening “Crimson Lady” (Prunus persica (L.) Batsch) peach on “Nemaguard” rootstock. During the growing season, stem water potential was measured weekly or bi-weekly from both the full and deficit irrigation blocks. Infrared temperature sensors were installed in the orchard in both the full and deficit blocks irrigated by furrow, drip, or micro-sprinkler methods. These temperature sensors were mounted on galvanized metal pipes extending above the tree canopy. The center of field of view for each sensor was aimed at the middle three trees of the center row for each measurement block. A datalogger system was used to record temperature readings at 15 min internals and readings were averaged to hourly outputs for each growing season. Thermocouples were installed in the orchard to record air temperature at the same frequency as the infrared sensors, and hourly canopy-air temperature difference was computed. A linear regression was made between the canopy-air temperature difference and stem water potential measurements. Correlation between stem water potential and canopy-air temperature difference showed a significant relationship (R2 = 0.6) where more negative potential values corresponded to larger canopy-air temperature differences (Figure 1). This is expected because when plants are under water stress, stomatal resistance increases thus stem water potential is more negative. At the same time, transpiration decreases thus the canopy could be at higher temperature than the ambient air due to reduced evaporative cooling. The graph also indicates that infrared temperature measurement is not sensitive to stem water potential variations in the range of -0.5 to -1.0 MPa. This may imply that the infrared canopy temperature approach is applicable to water stressed conditions such as under deficit irrigation, but not sensitive to well-watered situations. The regression equation was subsequently used to guide irrigation scheduling (Zhang and Wang, 2013). 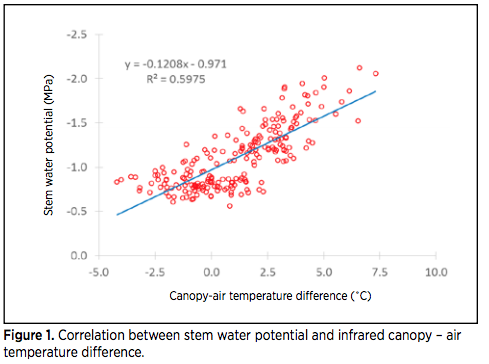 Peach fruit was harvested each year by a commercial contract crew following typical farming procedures.  Only marketable fruits were harvested and a total of two to three picks were used during each season. The total fruit weight per tree and number of peaches per tree were measured for each treatment block. Average weight per fruit or fruit size was obtained by dividing the weight per tree with number peaches per tree.  Fruit yield (weight per tree) under different irrigation treatments is shown for each year for the multi-year field study (Table 1). For furrow irrigation there is no significant difference in yield between full and deficit irrigation except in 2011 and 2012. For drip, the difference is significant in 2008 and 2015. For micro-sprinkler blocks, no significant difference was found in fruit yield.

Average fruit yield and size of fruit from 2013 to 2015 over furrow, drip, and micro-sprinkler methods showed no significant change when cumulative irrigation increased from an average of 360 mm to 1360 mm during the postharvest season of 2012-2014 (Figure 2). The average fruit yield was 11.9, 12.9, and 14.3 kg/tree when previous year postharvest irrigation totals was 360, 823, and 1360 mm, respectively. The large variation in yield from year to year was attributed, at least partially, to orchard management practices such as annual pruning and fruit thinning (see also Table 1). The size of fruit remained nearly constant at approximately 0.14 kg/fruit. 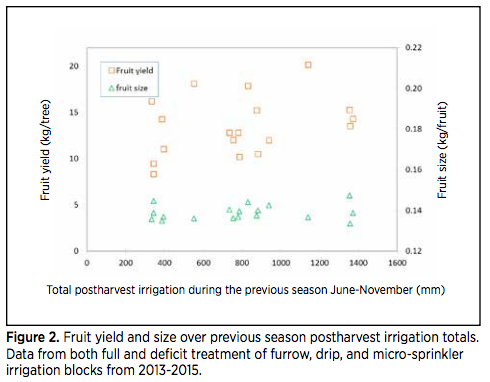 Assessing the Impact of Irrigation Water Quality on Strawberry Cultivars

SELECTIVE FORCES THAT ACT ON WEEDS