Resistance to glyphosate, paraquat and ACCase inhibiting herbicides has been confirmed in Italian ryegrass, a major weed in California orchards, vineyards, field crops and fallow fields.

Control of Italian ryegrass had been achieved with several different herbicides until resistance evolved with repeated use. Resistance to multiple post-emergent herbicides with different modes of action has also been confirmed within the same orchard, vineyard or field in some areas.

Dr. Marie Jasieniuk, associate professor in the UC Davis Department of Plant Sciences wrote in a Weed Science blog that glufosinate is an alternative non-selective post-emergence herbicide that can still be used to control herbicide–susceptible and most herbicide-resistant Italian ryegrass in California as only two populations with resistance to glufosinate have been documented. 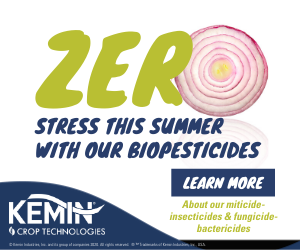 Glufosinate-ammonium is a contact herbicide that works by inhibiting an enzyme central to plant metabolism. Plants absorb this substance primarily through their leaves and other green parts.

Jasieniuk noted that the higher cost of glufosinate relative to other herbicides may drive lower use rates. The lower rates and other drivers including herbicide applications at non-optimal weed size, inappropriate weather conditions and insufficient spray coverage may result in sublethal rate selection of ryegrass by glufosinate.

Jasieniuk conducted a greenhouse study to evaluate the potential for low glufosinate rates to select for reduced susceptibility to the herbicide and to determine if selected populations are cross-resistant to herbicides with other modes of action.

The study was conducted with an herbicide susceptible parent population collected from a Sonoma County vineyard. Plants were grown in the greenhouse to the 3-4 leaf stage and treated with low glufosinate rates for three generations.

To evaluate the potential for low glufosinate rates to select for reduced susceptibility to the herbicide, and to determine if selected populations are cross-resistant to herbicides with other modes of action as has been observed in a few studies, Jasieniuk conducted a greenhouse study using an herbicide-susceptible parent population originally collected from a vineyard in Sonoma County. Plants were grown in the greenhouse to the 3- to 4-leaf stage and treated with low glufosinate rates for three generations.

Results showed that susceptibility to glufosinate was reduced in offspring in comparison with the susceptible parent population following only three generations of selection.

The study showed that repeated selection with glufosinate at low rates can reduce the susceptibility of Italian ryegrass populations to glufosinate, and points to the importance of incorporating a diversity of approaches, both chemical and non-chemical, in the management of ryegrass in annual and perennial cropping systems of California.