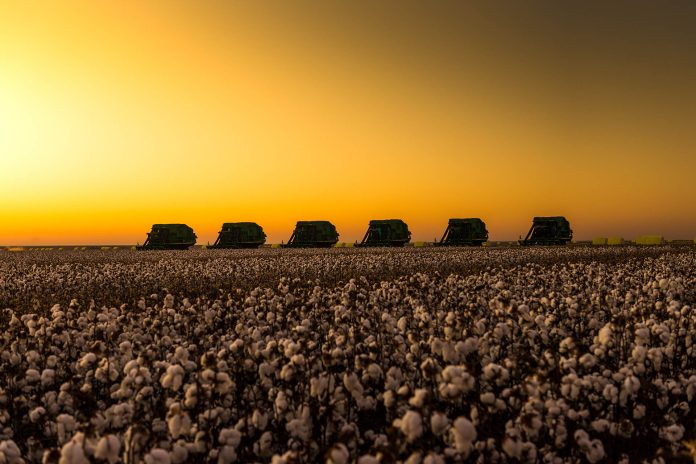 The funded amount for this project from CCGGA is devoted to support travel to California for Dr. Ulloa and to assist in evaluation, progeny development, breeding and coordination of seed increases of selected developed progeny and breeding lines of Pima and Upland cotton for future testing and germplasm public releases with improved resistance/tolerance to Fusarium wilt (Fusarium oxysporum f. sp. vasinfectum) race 4 (FOV4), a soil borne fungal pathogen. These FOV4 breeding research efforts and activities are coordinated and supported by the California team. In addition, funding partially pays for professional research/services support needed to increase our understanding of plant FOV4 defense mechanisms.

Over the past 14 years, the fungus that causes FOV4 has impacted fields in California’s San Joaquin Valley.  This fungus is particularly difficult to control in cotton as the hyphae or fungus- overwintering structures reside in the woody vascular tissues, preventing the penetration of fungicides. These structures can survive in soils indefinitely. In the United States, FOV4 was first confirmed in California cotton fields in 2003, however, in 2017 it was also identified in far-west Texas and in 2019 in New Mexico.

Cultivars with relatively high levels of resistance to FOV4 were originally identified in commercial Pima cotton (Gossypium barbadense L.), ‘Phytogen 800’, and originated-pool germplasm, ‘Pima S-6’. Field evaluation of cotton cultivars in FOV4-infested fields have provided information to develop a number of generalizations:  (1) most Pima cultivars show more severe symptoms and suffer higher levels of stunting and plant mortality from FOV4 than with most Upland and Acala cottons; (2) some moderate to highly-resistant commercial Pima cultivars have been developed from several seed companies and private breeders; and (3) several USDA-ARS experimental Pima germplasm or breeding lines with moderate to high resistance to FOV4 have been identified, developed, and publicly released (SJ-FR01 to SJ-FR09). These germplasm lines have helped to increase the genetic base for FOV4 resistance in Pima Cotton. Typical FOV4 symptoms are shown in Figure 1. Disease symptoms of this pathogen have been observed to differ between Pima and Upland cotton.

From 2006-18, we have been evaluating Pima germplasm from the USDA ARS and international breeding collections, and Upland germplasm from the USDA ARS Cotton Germplasm Collection College Station, Texas or breeding lines from around 13 public (universities and USDA) cotton breeding programs across the Belt through the regional breeder testing network or RBTN sponsored by Cotton Inc. and have provided information about the level of FOV4 tolerance of these breeding lines and germplasm. In addition, since 2013, more than 4,000 entries and developed progeny have been evaluated in infested FOV4 fields and a portion (1/4) in the greenhouse using artificial FOV4 inoculation.

During the growing season, plant responses to fungus-inoculum pressure were assessed through evaluations of root and stem vascular staining levels, plant mortality, foliar wilt symptoms and measures of relative plant vigor. In Upland cotton, germplasm with good levels of tolerance have been identified, and new breeding lines are being developed by USDA-ARS and the University of California. After FOV4 artificial-greenhouse and natural-infested FOV4 evaluations of these accessions, less than 0.1% were selected to develop highly resistant FOV4 progeny. Two sources (NM12Y1004 – NM12Y1005 and SA-3208) of Asiatic breeding origin were identified with tolerance to FOV4 and used to introgress and increase resistance. Pedigree information from additional parental lines or breeding stocks used to develop progeny revealed their sources to be exotic and wild Upland germplasm – triple/multiple crosses, deriving these SA-obsolete cultivars named ‘Auburn M’, ‘DES 920’, ‘MARSPD202085’, ‘S.N.0503-1’, PD 2165, and ‘Stoneville 14’, among others.

In 2019, around 130 selected breeding lines were ginned, acid delinted, and planted at two infested field sites in California [Los Palos (Figure 2) and Tipton Co. (Figure 3)] to validate their resistance/tolerance against FOV4.

These selected lines were also planted at the Tipton FOV4 infested site (Figure 3). In addition, evaluations were performed on more than 500 additional Pima and Upland cotton lines from progeny and breeding lines with different levels of FOV4 tolerance/resistance. Most of these lines were derived from multi-cross-combinations between and within Pima and Upland cultivars or germplasm lines with known FOV4 resistance to develop progeny and new populations to assess FOV4 resistance.

In addition, a subset of these entries was also planted in the El Paso, TX area in FOV4 infested field (Figure 4).  Following are images from the FOV4 infested field site near El Paso, TX.  We planted lines with known levels of FOV4 tolerance, and resistant and susceptible FOV4 check-cultivars using a RCBD with three replications (Figures 1-3).

Continuing with the breeding efforts of this cooperative project next year, we anticipate additional visits to California by Dr. Ulloa to coordinate and support the selection, harvest, ginning of breeding lines with good to excellent FOV4 tolerance/resistance for the 2020 year’s season.