The soilborne fungus Rhizoctonia is an extremely important pathogen of plants worldwide. Hundreds of vegetable, field, fruit and nut, and ornamental crops are susceptible to this fungus. Rhizoctonia is common and severe on cereals and herbaceous row crops but can also cause disease on woody species. Found in soils throughout the world, this pathogen has evolved survival strategies that enable it to become established wherever it is introduced. Despite the implementation of integrated pest management tools, Rhizoctonia remains a challenging pathogen that is difficult to control.

Understanding Rhizoctonia solani
Rhizoctonia is the genus name that refers to a group or “complex” of fungi. Initially, fungal species were placed in this Rhizoctonia group because they shared certain features, such as the absence of asexual (anamorph) spores (remember that fungi can have two different phases or forms: asexual and sexual); a sexual (teleomorph) stage belonging to the Basidiomycetes; distinctive cell wall structures (septa) that divide the relatively thick hypha into sections, an existence that is primarily in the soil; and being mostly pathogenic to plants. For most row crops, the species Rhizoctonia solani is the most important pathogen.

Rhizoctonia is considered a “species complex” because of the many closely related species and subspecies that make up this group. Figure 1 outlines and breaks down this complicated, diverse group of organisms. The Rhizoctonia genus, first of all, can be divided into two major categories: (A) Those species that have two nuclei per mycelial cell (called binucleates) and (B) those species that have more than two nuclei per cell (multinucleates). R. solani and other species (e.g., R. oryzae and R. zeae) are in the multinucleate group. Note that each fungus listed in Figure 1 has two taxonomic names. The Rhizoctonia name refers to the anamorph or asexual stage and is the phase of the fungus that infects plants and causes disease. The second name is the teleomorph or sexual stage. This form is rarely found in the field and probably does not cause disease in plants; however, researchers employ the teleomorph names when studying the interrelationships between the various species. Our challenging fungal foe is therefore known mostly as Rhizoctonia solani (anamorph) but is also referred to as Thanatephorus cucumeris (teleomorph).

The R. solani species is itself very diverse and can be separated into distinct groups. Different isolates of R. solani fall into one of many anastomosis groups, or AGs (Figure 1, see page 4). AGs are determined in the laboratory where two isolates are grown side-by-side in culture and the resulting reaction, whether the two hyphae fuse (compatible) or do not fuse (incompatible), is viewed under the microscope. Isolates that are deemed compatible are placed together into a numbered AG. Incompatible isolates cannot be in the same AG. There are currently 14 AGs: AG1 through AG13, and AGB-1. Seven of these AGs are further divided into subgroups. Molecular techniques are also available for AG classification; such techniques can be more accurate than searching for hyphal fusion under the microscope. Molecular methods, however, can be time-consuming to complete.
Categorizing R. solani isolates into these AGs is not an academic exercise but provides insights into how this pathogen functions in agriculture. Different AGs possess different traits; while some AG isolates have a broad host range, others are more restricted regarding the crops they can infect. For example, R. solani AG2-1 tends to be the main pathogen that causes wirestem on crucifers, while AG2-2/IIIB and AG2-2/IV cause brown patch in turfgrass and root disease on sugarbeet. R. solani AG3 is common on potato and causes stem and stolon lesions as well as black scurf on tubers. R. solani AG8 is primarily a pathogen of cereals but also infects potato roots. In contrast, AG4 has a broad host range and can infect many crops. So, identifying the AG status of an R. solani isolate can provide important information on the diseases caused by that isolate and the susceptibility of subsequent crops that might be placed in that field.

Finally, isolates belonging to the same AG are not all identical to each other. While sharing the same AG designation, the isolates can differ physiologically in how carbon sources and other chemicals are metabolized, how fast they grow in culture, and other features. Isolates in the same AG can also differ genetically and have varying DNA sequences. This great diversity found within R. solani isolates accounts for the difficulty that researchers have in fully understanding this important plant pathogen complex.

Diverse Diseases Caused by Rhizoctonia solani
Rhizoctonia solani causes different types of crop diseases, all of which are related to the soilborne nature of this pathogen (Table 1). R. solani can be a seed pathogen. Once seed are placed in the ground, R. solani that is residing in the soil can invade the seed and kill it before it germinates. Even if the seed germinates, R. solani can cause a decay of the roots and shoots before the seedling emerges above the soil surface; this early seedling disease stage is called preemergent damping-off. Post-emergent damping-off occurs if the diseased seedling is strong enough to grow above the soil surface, only to succumb and collapse shortly afterwards (Table 1). Collectively, seed decay, preemergent damping-off and post-emergent damping-off can result in loss of plants very early in the production cycle, causing stand loss in the field. Healthy seedlings that escape death at the seed and newly germinated stages remain vulnerable to this pathogen; established seedlings can still be infected by R. solani and develop root rots and/or lesions on stems in contact with soil (Table 1).

Plant leaves are not immune to R. solani. Field cultivation practices and splashing water can move bits of R. solani-infested soil up into the foliage of plants. Under favorable conditions, the introduced R. solani mycelium can colonize the leaf tissue and cause foliar blights in crops such as endive (Table 1). For head-forming vegetables such as lettuce and cabbage, the bottom leaves are unavoidably in direct contact with the soil. If R. solani is present in the underlying soil and if conditions (excess soil moisture) favor the pathogen, extensive rotting of the lower leaves and plant base can take place, resulting in bottom rot. If fruits (e.g., cucumber) and pods (e.g., beans) happen to be in contact with infested soil, these harvestable commodities can become diseased (Table 1). Finally, sweet potato roots, potato tubers and other similar plant structures under the ground can suffer from lesions, rots, and defects from R. solani in the soil surrounding these fleshy plant parts. Table 2 lists some row crops that are susceptible to R. solani. 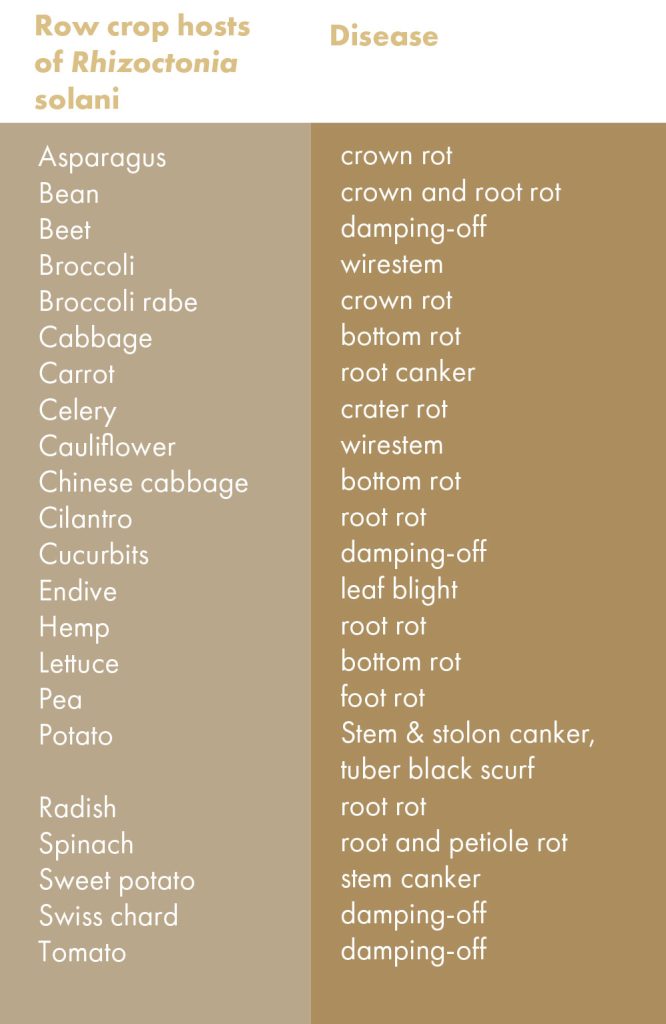 Disease Development
Rhizoctonia solani has evolved to be a challenging, persistent soilborne pathogen. Tiny, tightly clustered clumps of mycelium grow together to form resilient structures (sclerotia) that can withstand unfavorable conditions and allow it to survive for years without a plant host. These sclerotia are the main mechanism for survival, since R. solani is not a particularly aggressive or successful saprophyte in the soil environment. When a host plant grows next to sclerotia and favorable soil conditions are present, the dormant mycelium germinates and can infect the plant.

Diagnosing Rhizoctonia diseases based only on symptoms is risky because Rhizoctonia is not the only soilborne pathogen that causes seedling damping-off, root rots and stem lesions of row crops. On spinach, damping-off and root rot can be caused by R. solani, Fusarium and Pythium; visually, one cannot reliably distinguish between the symptoms caused by these three pathogens. Cilantro crops can develop similar-looking root diseases caused by R. solani and Fusarium. Cauliflower transplants are susceptible to both Rhizoctonia and Pythium, both of which cause the lower stem tissue to become discolored. Cauliflower disease diagnostics is further complicated because the root maggot insect feeds on lower stem tissue and causes symptoms identical to those created by R. solani. Precise and accurate diagnosis of Rhizoctonia diseases will therefore require lab-based examination and assays. Diagnosticians usually deploy culture tests in which surface sanitized bits of symptomatic tissues are placed in microbiological agar media. These scientists then use microscopes to examine the mycelium that grows out of the plated tissue. For most fungi, spores are important structures that diagnosticians rely on for fungal identification; since R. solani produces no spores, scientists must examine the hyphal structures or employ molecular assays to confirm this pathogen.

Managing R. solani
Rhizoctonia is a difficult pathogen to control. Attempts to manage this fungus will require the implementation of IPM practices.

Site Selection Plant in fields that do not have a history of Rhizoctonia problems and that have well-draining soils.

Crop Rotation Avoid planting a susceptible, sensitive crop in a field known to have significant problems with this pathogen. Rotate to crops that are either not susceptible or are less sensitive to damage caused by R. solani. Remember that some R. solani AG isolates have a very broad host range and can infect many row crops; however, other AG isolates show some level of host specificity and are pathogenic on only a few crops. It is therefore useful to know which AGs are present in the field.

Time of Planting In some cases, moving the planting date to a different time of year may help reduce losses from R. solani. Planting the crop in the warmer, drier part of the year allows the seedling to grow more rapidly and perhaps escape or minimize infection from R. solani.

Fungicides Plant seed treated with a fungicide.Note that the seed treatments used to protect against Pythium have little effect on Rhizoctonia. Fungicides applied to emergent plants have little benefit.

Resistant or Tolerant Cultivars There do not appear to be row crop cultivars that have genetic resistance to Rhizoctonia. However, if young seedlings escape infection early in development, the maturing stem tissue will later become resistant to infection by R. solani.
Sanitation Remember that as a soilborne pathogen, R. solani will be moved and spread via mud adhering to tractors and equipment. Prevent the introduction of R. solani into plant nursery and transplant facilities by using new or thoroughly sanitized containers and trays, disposing of used rooting media and other sanitation measures.