These trials took place at UC-managed research farms in Shafter (Kern County) and Parlier (Fresno County). The Parlier research farm is the Kearney Agricultural Research and Extension Center and will be referred to as “Kearney” for the remainder of this article.

Based on the results of our trial, we have outlined some suggestions for trying out cover crops on your farm. Our suggestions depend on your goals for planting cover crops and your concerns about fitting them into your existing cropping system. 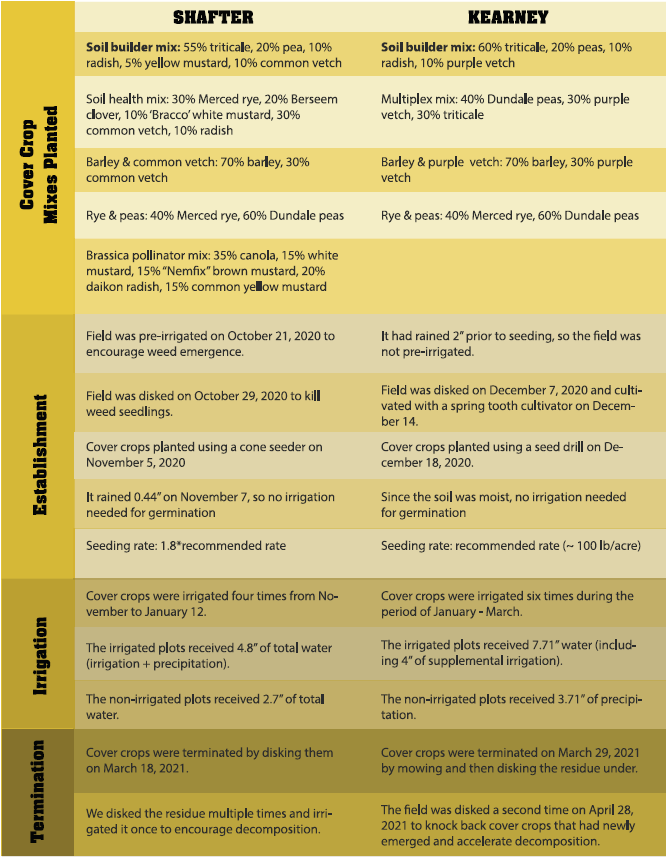 Based on the trial results, if your goal is weed suppression, you may consider the following.

Grasses appeared to be most effective at suppressing weeds, especially Merced rye which grew vigorously in both irrigated and non-irrigated plots at both locations. Brassicas also contributed to weed suppression, while legumes were least competitive with weeds, especially at Kearney.

If your goal is weed suppression, consider higher percentages of grasses and brassicas in your seed mix.

If it is not realistic to purchase enough seed for higher seeding rates, pre-irrigating before the first rain to allow weeds to germinate, followed by cultivation prior to planting, can help knock back weeds that may compete with cover crops at germination.

If pre-irrigation is not possible, consider waiting for weed seeds to germinate after the first decent rain, then cultivating your field before planting your cover crop.

However, try to not wait too long, as colder temperatures may inhibit germination. This may have been another reason why cover crop establishment was not as vigorous at Kearney; we planted on December 18 when the high temperature was 53 degrees F and the low was 40 degrees F. Compare this to the planting date of November 5 in Shafter where the high was 20 degrees F warmer (high of 73 degrees F, low of 52 degrees F).

Therefore, if you cannot plant until later in the winter, consider seeding grass seeds in higher proportions, especially if weed suppression is your goal.

Do not assume that there is enough moisture in the soil to help your cover crops properly germinate if you are planting after a rain event.

The legumes in both locations did not perform well, so they did not offer much sustenance for pollinators.

The brassicas in Shafter started blooming at the beginning of February, while the radishes at Kearney started blooming in mid-March. This provided forage and diversity for the pollinating bees from the surrounding almond orchards. Butterflies were also observed on these flowers.

Ladybugs were seen on the grasses in both locations, which can serve to keep aphid populations low on surrounding or subsequent crops.

At Kearney, water infiltration was measured using a mini disk infiltrometer before planting cover crops and right before termination of cover crops.

Infiltration rates were higher when cover crops were in the ground compared to the bare soil prior to planting cover crops (Figure 1).

There were no significant differences in infiltration across seed mixes. Therefore, based on our results, there is not one particular mix we would recommend to improve water infiltration.

Having roots in the ground improves the ability of water to enter the soil surface. Roots create channels for water to enter so that more water can be stored in the soil.

With lower infiltration rates, water is more likely to run off the surface. This is why avoiding bare soil is important if your goal is to increase the amount of water that can be stored in your soil.

Concern: Will the Cover Crops Tie Up Soil Nitrogen?

In Shafter, we took soil samples zero to six inches deep on April 21 in the irrigated plots five weeks after termination. The fallow samples had an average soil nitrate level of 45.8 mg/kg, which was similar to the soil nitrate level that we measured before planting the cover crops.

Two of the mixes had soil nitrate levels that were very close to that of the fallow area: the brassica pollinator mix and the soil builder mix. Those mixes were mostly or entirely brassicas, so they decomposed quickly enough that the nitrate they had taken up had returned to the soil. The other three mixes (soil health, rye and peas, and barley and vetch) led to significantly lower soil nitrate levels.

Grasses have higher C:N ratios, which meant that soil microbes took longer to decompose their residue and needed to mine soil nitrogen to do so.

Concern: Can I Really Grow Cover Crops Without Irrigation?

Shafter
All of the non-irrigated plots contributed some amount of biomass. This means that even if you cannot irrigate your cover crops, you can still reap some soil health benefits.

Kearney
The differences in biomass between the irrigated and non-irrigated plots were not significant, except for the irrigated Merced rye and peas and the irrigated barley and vetch. These two irrigated mixes yielded nearly twice as much biomass as their non-irrigated counterparts (Figure 3). This biomass was mostly attributable to the grasses in both mixes.

The non-irrigated side produced an impressive amount of biomass given that it only received 3.71 inches of water.

Based on the results of our trial, cover crops can still produce biomass without irrigation in the San Joaquin Valley, even during a drier winter. While they may not produce huge amounts of biomass without irrigation, having roots in the ground is still beneficial for suppressing weeds, providing beneficial insect habitat, increasing water infiltration and feeding your soil biology.

Cover crops turn sunlight into carbon that feeds your soil microbes through their root system. Therefore, by simply maintaining living ground cover, you are feeding your soil. In addition, when you return cover crop residues to your soil, microbes will decompose them and slowly release available nutrients that can be used by your cash crop.

If you are growing cover crops in a limited water environment, consider planting Merced rye and brassica species, such as daikon radish or mustards. These are also good options if you plant your cover crops later in the winter.

Triticale also grows well with limited water and decomposes more quickly than Merced rye, which is something to consider if you are disking in your cover crop and planting an annual crop shortly after.

In both Shafter and Kearney, the legume species did not perform well because of the high soil nitrate levels and low water conditions. If your field is in a similar situation, it might be better to save money and not buy legume seeds.

Interested in trying out cover crops? The USDA and the California Department of Food and Agriculture have programs to help you pay for it. For more information about the USDA resources, reach out to your local USDA Natural Resource Conservation Service office. For more information about the CDFA Healthy Soils Program or getting started with cover crops, reach out to Shulamit Shroder at sashroder@ucanr.edu or Jessie Kanter at jakanter@ucanr.edu.