This project evaluated the efficacy of weed control options for both conventional and organic growers. Pre-plant mechanical cultivation and glyphosate spray were evaluated with the goal of providing regionally relevant information about an integrated weed management tool for improved stand establishment.

This field was planted in the spring in the Sacramento Valley of California. Weeds were germinated with winter rains. On some plots (treatments 3 and 6), pre-plant glyphosate was sprayed on plots on January 31, 2020 at a rate of three pints glyphosate/acre. On other plots (treatments 2 and 5), mechanical cultivation was implemented on February 11, 2020 once the soil was dry enough. This cultivation was very shallow (top few inches of the soil) to avoid bringing new weed seeds to the soil surface.

Alfalfa seed was flown on the field on March 4, 2020, and the field was then ring-rolled to cover seed and get good seed-to-soil contact. The field was then irrigated for germination a week later. In-season weeds were controlled on some of the plots (treatments 4, 5 and 6) with a tank mix of Raptor (Imazamox Ammonium Salt) at 6 fl oz per acre and Buctril (Bromoxnil) on April 25, 2020.

Baseline weed counts were taken on January 29, 2020 from all plots before treatment implementation but after weed germination. Individual broadleaf weeds and grasses + sedges were counted in three random 20×20 cm quadrats per plot. Plants were counted on this date because weeds and alfalfa plants were small and percent cover would not have captured potential differences.

Plots were hand harvested on June 8, 2020 prior to first cutting by the grower, which occurred on June 10. Two square-meter areas of each plot, which were representative of the larger plot, were cut. Yield biomass was separated into weeds and alfalfa, dried, weighed separately and then converted to a pounds dry matter/acre basis.

Finally, on June 23, 2020, following first cutting, alfalfa stand counts were taken in all plots by counting the number of alfalfa plants in three 20×20 cm quadrats.

The first weed counts (January 29, 2020) collected before treatment implementation showed the average count for grasses + sedges for all plots was zero at this count. For broadleaves, there were no significant differences by treatment, but there were significantly more weeds in the side of the field with no in-season control compared to the side where Raptor was applied in-season.

April 9, 2020 Weed Counts
Grasses + sedges: There were not many grasses or sedges in the field.
Broadleaves: There were significantly less broadleaves in the plots that had pre-plant weed control (glyphosate or tillage).

Alfalfa: Alfalfa plants were small at this counting date; however, there were significant treatment differences with the pre-plant weed control treatments having more alfalfa than the control.

There were significantly more broadleaf weeds in the plots that had no pre-plant weed control (glyphosate or tillage) (Figure 1). Additionally, the plots that had Raptor applied in-season reduced broadleaf weeds down to negligible levels compared with no in-season treatment (Figure 1). There were not many grasses or sedges in the field; however, there were more grasses in the side of the field with no in-season herbicide application.

Alfalfa yields were near zero for the plots where early control was not applied (Figure 4). Additionally, yields were improved over 90% when an in-season weed control was applied (Figure 4). This yield data is only for the first cutting of the stand, not for the full first year of production. There were significant differences in alfalfa yield between pre-plant treatments and plots that had no pre-plant weed control (Figure 3). Both the glyphosate and tillage pre-plant treatments increased yields. In addition, the Raptor spray significantly increased yields compared to plots without in-season control.

A combination of early weed control combined with in-season weed control was the most successful at controlling weeds and enhancing alfalfa yields.

Biomass was separated into alfalfa (Figure 3) and weeds after plots were hand-harvested. Alfalfa and weeds were then weighed separately by plot. There were significantly more weeds by weight in the side of the field that did not get the herbicide spray in season compared to the side that did get an herbicide spray. However, within one side of the field (Raptor or not), there were no significant differences by pre-plant treatment. In other words, even though there was more alfalfa in the plots with pre-plant weed control, there were also more weeds. The photo taken at harvest show how heavy the weed pressure was even in plots with Glyphosate and tillage pre-plant that did not have in-season herbicide application. 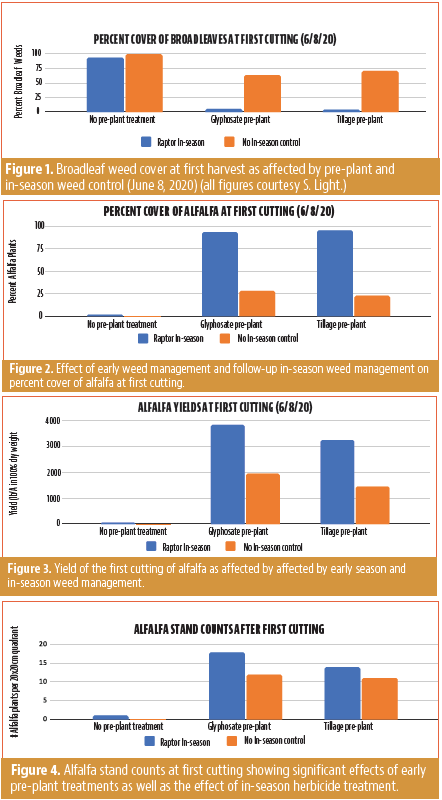 The data shows that controlling weeds prior to planting, either with shallow tillage or an herbicide spray (glyphosate), will reduce weed pressure, increase yields and lead to a stronger alfalfa stand after first cutting. There were also differences between plots that got an in-season herbicide and those that did not. Yields were highest in plots that had both pre-plant weed control and an in-season herbicide. The plots with the highest stand counts after first cutting were also the plots that had both pre-plant and in-season weed control. However, the stand in the pre-plant treatment plots that did not have an in-season herbicide application still had relatively high alfalfa stand counts after first cutting. This means that with early effective weed control, the alfalfa stand may be more robust for future cuttings, even if weed pressure was high initially. As shown in the provided photos, the alfalfa was robust in the understory of the canopy, even when broadleaf weeds were very large. By first cutting, many broad leaf weeds had gone to flower, so they likely would not return after first cutting. However, when included in the harvest, these weeds reduce quality and price of the hay and also contribute seed to the weed-seed population in the field.

Ideally, both pre-plant and in-season weed control would be implemented to get highest yields, quality, a vigorous stand and ensure animal safety. However, growers (particularly organic) may be able to do a pre-plant tillage to control weeds and establish a good alfalfa stand, accept some yield reduction and additional weed pressure leading up to first cutting and then have a strong alfalfa stand for subsequent cuttings.