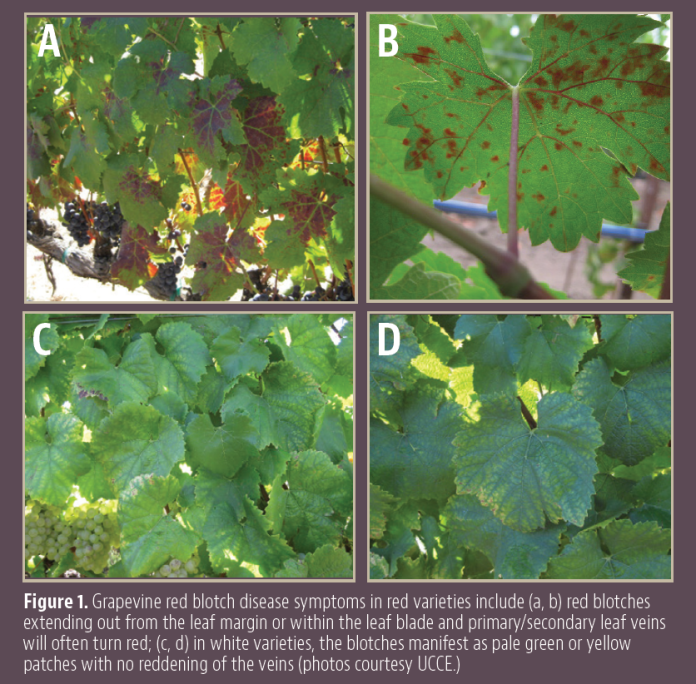 Symptoms of GRBD typically first appear around mid-season, although timing can vary across cultivars and between years. In red varieties, red blotches form outward from the leaf margin or within the leaf blade, and primary/secondary leaf veins will often turn red (Figure 1a). In white varieties, the blotches manifest as pale green or yellow patches with no reddening of the veins (Figure 1b). Symptoms typically first originate on basal leaves then over time progress to additional leaves further up the shoot. In the early season, these foliar symptoms are distinct from grapevine leafroll disease (GLD), but by late fall, leaf blade coloration of vines with GRBD may be similar to vines with GLD.

The unique symptoms of GRBD were first noticed in Napa County in 2008, and in 2011 testing confirmed the existence of GRBV, a previously uncharacterized Geminiviridae. Subsequent vineyard surveys across the U.S. revealed that GRBV is widespread nationally, and the virus has also been reported from vineyards in Canada, Mexico, Argentina, India and South Korea. The wide geographic range suggests that GRBV was likely initially spread through the propagation of infected plant material. That said, secondary spread has been recorded in some regions, indicating there may be unique insect vectors and/or non-crop reservoirs of GRBV.

Data so far indicate that GRBV appears limited to the genus Vitis, which can include non-cultivated wild-type grape vines that typically grow in riparian habitats. Multiple insect surveys have shown that certain species or genera tend to frequently test positive, although none of which are considered significant pests of grape vines. To clarify, insects that test positive for GRBV do not necessarily have the ability to transmit the virus. Rather, these surveys help researchers identify candidate insect species for further testing. At present, transmission experiments with common vineyard pests such as leafhoppers, mealybugs and sharpshooters have not shown any transmission.

The only insect to date that has been reported by two different labs to successfully transmit GRBV is the three-cornered alfalfa hopper (Membracidae: Spissistilus festinus) (TCAH) (Figure 2a), which was able to move the virus between potted vines in a greenhouse setting. As its name implies, TCAH is primarily a pest of leguminous crops such as alfalfa, peanuts and soybean. While adults can oviposit into grape vines, the immature TCAH cannot completely develop on this host. In contrast, TCAH thrive on many types of legumes, which are critical for their development. Although TCAH can be found in California vineyards, its pest status is negligible and densities in vineyards typically tend to be very low. TCAH are pierce-suck feeders that, when present on vines, can girdle lateral shoots and leaf petioles, which leaves a distinct dark ring and leaves distal to the girdle turn red (Figure 3).

TCAH activity in vineyards (and in the vine canopy specifically) appears to be closely tied to the presence and quality of legumes in vineyard ground covers. TCAH overwinter as adults in protected areas in and around vineyards, and in the early spring begin to deposit eggs onto ground covers (likely legumes.) Nymphs (Figure 2b) pass through five juvenile stages as they develop. Ideal temperature range for nymph development is 65 to 95 degrees F; however, they can develop at temperatures as low as 55 degrees F. The appearance of first-generation adults roughly coincides with the seasonal dry-down and/or mowing/cultivation of vineyard ground covers. As ground covers are diminished in the late spring and early summer, TCAH adults may opportunistically feed in the vine canopy, which could potentially lead to transmission of GRBV between vines. That said, a recent study found that TCAH appear to have a very strong preference for ground covers, and significant activity in the vine canopy was only observed once >90% of ground covers were eliminated or dead. In the North Coast, TCAH likely complete 1 to 2 generations per year depending on climate and availability of food resources, whereas in warmer areas such as SoCal TCAH can complete 3 to 4 generations per year. Adults have been observed in vineyards until as late as leaf fall, after which they seek shelter in protected areas.

Given TCAH generally have a low affinity for grape vines, that other insects have tested positive in surveys, and the occasional rapid rates and extensive spread of disease, it is worth exploring other candidate vectors. Furthermore, field transmission by TCAH remains unclear, as does transmission efficiency (that is, how quickly TCAH can acquire and transmit the virus,) both of which are critical pieces of information to better understand disease ecology. As such, there are no existing recommendations to use insecticides to control TCAH in vineyards. Rather, a management strategy that concentrates on the removal of vines and reduction of persistent leguminous ground covers (such as burclover and Spanish clover) may be more effective. While the specific economics of individual vineyards will vary, the general suggestion is that individual vines be replaced when overall infection is <20% of the block, whereas with >20% of vines infected it may make more sense to replace a larger section or the entire block.

One insect that is currently being investigated as a potential vector is the leafhopper Scaphytopius graneticus (Cicadellidae), which has frequently tested positive for GRBV – but again, this does not mean it can necessarily transmit the virus. Aside from frequently testing positive, what makes S. graneticus unique from other candidate vectors is its strong affinity for grape vines. Very little is known about this insect, and it is not considered a significant vineyard pest, but the sparse records that exist all report it from grape vines in the western U.S. Furthermore, recent vineyard surveys have documented relatively high populations of S. graneticus that are almost exclusively found in the vine canopy. As such, studies are currently underway to evaluate S. graneticus ability to transmit GRBV in both a greenhouse and field setting as well as characterize its host plants and reproductive biology.

There are currently no thresholds or management recommendations for TCAH in vineyards. The existing information does not support the use of insecticides for population control. Strategies that remove infected vines and reduce persistent leguminous ground covers may be more effective. This insect is generally in low abundance and prefers to reside on leguminous ground covers. While some opportunistic feeding in the vine canopy can occur, it remains unclear whether this is sufficient to spread GRBV under field conditions. Additional studies are currently underway to verify TCAH field transmission of GRBV. In the meantime, monitoring TCAH populations on ground covers (using a sweep net) and in the vine canopy (using yellow sticky cards) can be combined with disease mapping to build a picture of annual changes in pest densities and disease incidence within the vineyard and drive management decisions.