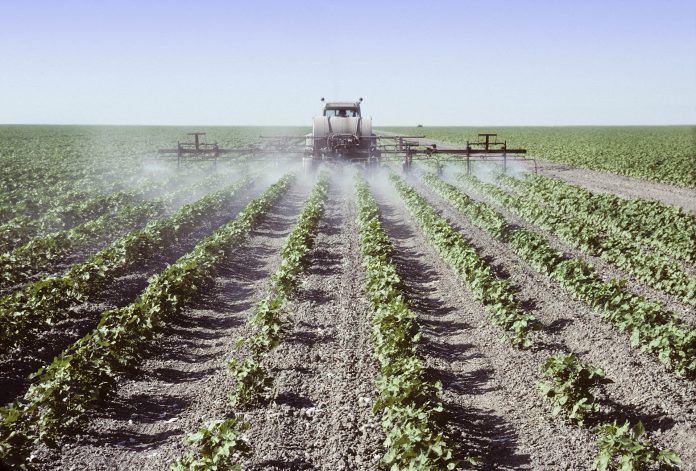 1.) Develop an expanded database on the current efficacy of labeled/recommended insecticide and acaricide products on key insect and mite pests of cotton in the San Joaquin Valley and document the influence of these products on beneficial arthropods with the objective of providing better guidelines on pesticide use.

2.) Evaluate the effectiveness of new candidate insecticide/acaricide products on key San Joaquin Valley cotton pests, the impact of these new compounds on populations of beneficial arthropods, and devise strategies for deploying these new products.

We must maintain a multifaceted IPM approach to sustain an efficient and stable system of pest management in California cotton and to improve overall profitability. Insecticides remain a key component of effective management of arthropod pests in cotton. Furthermore, management of insect pests is a critical aspect of managing sticky cotton. California has a reputation for producing high-quality cotton, and successfully managing whiteflies and aphids and the resulting havoc they can create with lint quality is key to maintaining this reputation. Up-to-date data on insecticide efficacy are in constant demand by growers and PCAs, as are data on how given insecticides can fit within an IPM program. The results from this project will clearly be used nearly immediately.

Regulatory actions involving insecticides are ongoing and likely inevitable in California’s agricultural sector, which can lead to uncertainty and changes to what tools are available to control arthropod pests. In recent years, several insecticides, such as several organophosphates, Temik®, and endosulfan, have been lost due to marketing decisions (probably hastened by regulations). Use of several EC formulations in cotton have been limited due to VOC regulations in the SJV – dimethoate, abamectin, etc. Concerns about off-site movement (via water and air) have threatened registrations and use of chlorpyrifos and pyrethroid products (and several premixes that contain a pyrethoid). Belt® insecticide was removed from the market although it was promoted and thought to be a reduced-risk material for beet armyworm (and other species) control. Recently, numerous insecticides, especially neonicotinoid products, are being scrutinized due to the ongoing honeybee/pollinator concerns with proposed regulations potentially having significant impacts. There are a variety of neonicotinoid products used by the industry that could be influenced by future regulations. Registrations of “new” insecticide products such as Transform® are threatened and have been delayed (on again and off again) as well due to the pollinator issue. Transform will not be available for the upcoming season in California. During the last growing season, chlorpyrifos was slated from removal from the marketplace. This has clearly left a gap in tools for late-season management of aphids and whiteflies. The overall effect of the losses or lack of registrations is very problematic and makes pest management more challenging.

Products are also being removed from the “toolbox” because of the build-up of insecticide resistance in pests, which are constantly evolving. Organophosphates are typically not useful for lygus management, and pyrethroid insecticides may be useful for lygus for one application per season due to resistance. Spider mite control options have been available and numerous, but there appears to be some slippage in performance in recent years in other field crops. Given the ability of spider mites to develop resistance in multiple regions and cropping systems, this is not a surprise. Presently, whitefly control options are still in place although during some “application windows” there are now a shortage of options. Mid-season aphid management is still viable as long as the neonicotinoid products are available, but late-season there is a critical void with the loss of chlorpyrifos. Maintaining effective aphid and whitefly IPM programs is essential to addressing the threat of sticky cotton to the industry.

The challenges from development of insecticide resistance and regulatory actions are best addressed with well-planned research and interaction/collaboration with all concerned industry representatives. Fortunately, new materials are developed to facilitate IPM programs. These new products must be evaluated under California conditions. This development of new products appears to have slowed somewhat recently with the consolidation of the agrichemical industry and changes in ownership that have disrupted and delayed research plans. In the interim, available experimental products will be evaluated, registered products will be researched and evaluated for efficacy, and other IPM tactics will be studied and developed. This research has allowed and will continue to allow a thorough evaluation of the applicability of experimental materials for the California cotton system before they appear on the market. By examining the complete “big picture” of California cotton IPM, this project helps to determine the applicability and fit of these products. The pests of interest in this project include cotton aphids, spider mites, thrips, whiteflies, lepidopteran larvae, and lygus bugs. Emerging and invasive pests will also be addressed, as needed and relevant. The integration of insecticides and acaricides with other management approaches (biological control, etc.) will be emphasized.

The research season in 2019 progressed well, despite some weather challenges early in the season that made research challenging when trying to get cotton planted, although this was something that commercial growers faced as well. Late-season rains prevented us from getting out cotton planted “on time”, especially at the Shafter Research Station. Planting at West Side Rec was less affected. Whitefly populations were low but were relatively consistent over the course of the trial. Our aphid populations steadily declined after the first application, leading to very low populations after the second application. In the past year, we continued conducting the research trials at the locations (West Side REC and Shafter Research Station) where they have been conducted for the past several years. Field and laboratory work was split between both locations, with the lygus and mite trials conducted at West Side REC and the aphid/whitefly study at Shafter Research Station. 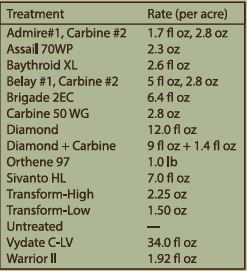 For all results, see tables and figures for full analysis details and means.

Secondary pests: Aphid and mite populations were low during this trial and none of the treatments led to very high levels. Populations of aphids did differ significantly between treatments (F14,42 = 2.67, P = 0.007). At 10 DAT1 when they were assessed, aphid populations were highest in the Brigade plots (~1 per leaf), followed by Baythroid, Vydate, and then the Untreated. The only significant differences were between Baythroid and Assail, the latter which had the fewest. Mites were extremely low overall, with no significant differences among treatments (F14,42 = 0.57, P = 0.87). After the second application (6 DAT2), the untreated had the most natural enemies, followed by Vydate. Orthene, Transform-ow, and Assail all had few natural enemies. These patterns generally persisted through the end of the study. At 13 DAT2, the untreated had by far the most natural enemies, followed by Warrior and the Admire/Carbine treatment.

Similar to previous years, we have continued to monitor insecticide resistance in lygus populations for key insecticides. This includes older materials like Vydate and Capture, and newer materials that have been increasingly relied upon for lygus management, Capture and Carbine. For Vydate and Capture, these assays consisted of exposure of insects to the material in insecticide coated plastic bags. The Carbine method relies on dipped green beans, while Transform uses floral foam soaked with a solution containing the insecticide.

The data are still being processed for these assays, but we can report on the number of assays that were completed. To mirror prior years, we conducted both early and late season assays. For the early season assays, we had four locations, with insects collected between May 31 and June 13. For the late season assays, we again attempted assays at four locations, but lygus were no abundant enough for the full complement of assays. At two of the locations, we could run all four materials. At one site, we only had enough for two materials, so we focused on Carbine and Transform. At the other, site, we were unable to collect enough lygus for assays.

Aphids and Whiteflies
Objective: To compare the efficacy of selected registered insecticides and
experimental materials against cotton aphids and whiteflies during the midand
late-season period in Pima cotton.

For all results, see tables and figures for full analysis details and means.

Aphids: On the day of application, aphids averaged 116/leaf. At 2 DAT, The low rate of Transform was most effective (91 percent control), followed by Lorsban+Dibrom and the high rate of transform. At 7 DAT1, both Transform rates performed well, with 98 and 97 percent control of the high and low rates respectively. Lorsban and Sefina-Low both provided 89 to 90-percent control. At 13 DAT1, many of the treatments provided excellent levels of control (many over 90 percent 80 percent). This included all of the newer materials (Sefina, Sivanto, Transform, PQZ, Carbine; all rates) as well as Assail, Lorsban+Dibrom, and Knack. Meanwhile, by this point, Vydate, Lorsban, and Courier had increased numbers of aphids relative to the control (numerically, not significantly different). Immediately after the 2nd application (2 DAT2), the Lorsban+Dibrom had the fewest aphids. At 7 DAT2, aphid populations in the untreated had started to crash and were only 9 per leaf. The following sampling dates were somewhat less useful because of the low untreated numbers, with one exception being that these patterns showed which treatments otherwise maintained aphid populations (see Vydate in particular).

Whitefly nymphs: On the day of applications, whitefly nymph populations were low at 0.9/leaf. At 2 DAT1, only Knack provided >50 percent control at 56 percent. At 7 DAT1, a number of the other treatments began to provide some level of control, with Sivanto-Low provided the best at 83 percent, followed by Assail+Bifenture at 76 percent. A number of other treatments provided 60 to 70 percent control. At 13 DAT1, the untreated had fairly low numbers, so percent control was poor across treatments (other than Courier). At 2 DAT2, Sivanto-High provided the best control (82 percent), followed by Assail and Sefina-High.  Lorsban provided the least level of control at this time point. At 14 DAT2, Cormoran provided the most control, followed by Assail, Carbine (although this appears to aberrant), Sefina-Low and Assail+Bifenture. Across dates, Vydate and Admire Pro performed poorly, several times having more nymphs than the untreated.

Whitefly adults: Whitefly adult counts typically ranged between 1 and 2 per leaf in the untreated over the course of the study. There were only significant differences among treatments for several of the assessment dates (7 DAT1, 2 DAT2, and 21 DAT-2 – at α = 0.10). Posthoc comparisons did not indicate any significant differences except on 7 DAT1 when the untreated was significantly different from over half of the treatments.  No individual treatment appeared to stand out when viewed across dates.

Secondary pests: Spider mites were evaluated as a secondary pest that could be flared by treatments for aphids/whiteflies. Mite counts were very low over the course of the study. We therefore analyzed counts summed by plot across the entire study. There were not significant differences among treatments for these counts (F19,57 = 1.17, P = 0.31).

Yield: Measuring yield was not one of the key aspects of this study because we are focused on managing aphids and whiteflies because of the way they threaten quality of lint (via sticky cotton) rather than quantity of lint. We did not detect significant differences in yield quantity (F19,38 = 0.41, P = 0.97).