Growers throughout the country and around the world plant a wide range of cover crops for a variety of reasons. Cover crops can reduce soil compaction, improve water infiltration, improve soil structure, and feed soil microbes: they encourage a healthier and more diverse soil ecosystem.

Researchers in California are analyzing the best ways to incorporate cover cropping into the state’s diverse agricultural systems, from high-value vegetable production on the central coast to the cotton, tomato, and almond fields of the central valley.

Cover Crops on the Central Coast

Eric Brennan and his team at the USDA Agricultural Research Service started the Salinas Organic Cropping Systems trial in the Salinas Valley in 2003 to understand the long-term impacts of various cropping systems and soil amendments. This trial focuses on organic lettuce and broccoli, two of the high-value crops grown in the area known as the nation’s salad bowl.

To maintain soil organic matter and provide nutrients to their crops, organic vegetable growers in this area prefer applying compost instead of planting cover crops. The amount of time that cover crops require for incorporation and decomposition can shorten the growing season for these high-value crops (Brennan & Boyd, 2012.) To make this practice more feasible for growers in the area, this group of researchers has developed three strategies for integrating cover crops into the vegetable cropping systems of the Central Coast.

Option 1: Plant the cover crops only in furrow bottoms, not the entire field. After 50 to 60 days of growth, the grower can spray the cover crops and then do the usual tillage necessary to prepare the ground for planting the cash crops. By planting time, the cover crop residue has already decomposed. This method reduces runoff and erosion but does not reduce nitrate leaching, so this is best for fields with runoff problems but without high nitrate levels. However, this method makes controlling weeds during a wet winter difficult and costs more than simply leaving the field bare (Brennan, 2017.)

Option 2: Plant non-legume cover crops on the vegetable beds and mow the cover crops repeatedly throughout the growing season. This maximizes nitrate scavenging while minimizing the amount of residue that needs to decompose right before planting. The ideal cover crop for this practice would be a grass, like cereal rye. Repeated mowing would reduce the amount of water lost to evapotranspiration from the cover crop but still enable the rye to scavenge nutrients that could otherwise be lost to leaching (Brennan, 2017.)

Option 3: Turn the cover crop residues into a highly nutritious juice and compost. To do this practice, a grower would plant a non-leguminous cover crop in October and allow it to grow until mid-December, at which point it will have scavenged most of the nitrogen that it will use. The grower then harvests the cover crop, leaving as little residue behind as possible. They can then feed the residue into a screw press, which will separate the liquids and solids. The liquid component has a relatively low nitrogen concentration and can be applied to the vegetable crop to fulfill some of the crop’s nutrient needs. The solid residues can be composted and applied at a convenient time, to provide organic matter to the soil (Brennan, 2017.)

Researchers are still working on refining these strategies, but they could allow central coast vegetable growers to reap the rewards associated with cover crops while maintaining a profitable enterprise.

Annual Systems in the Central Valley

For the past 20 years, Jeff Mitchell and his team at UC Cooperative Extension have studied the effects of reduced tillage and cover crops on a tomato-cotton rotation at the UC’s West Side Research and Extension Center. This study measures the efficacy of these practices in reducing air pollution and increasing soil organic matter. Reduced tillage and cover cropping have resulted in less dust emissions compared to conventionally managed fields (Mitchell et al., 2017.) They found that cover cropping increased soil organic matter more than conservation tillage alone did (Veenstra et al., 2006.) Overall, these practices have improved soil health by increasing aggregate stability, water infiltration, and soil organic matter while maintaining similar yields to the conventional system (Mitchell et al., 2017.) This study has allowed researchers to see the long-term effects of conservation tillage and cover cropping on tomato and cotton systems in the San Joaquin Valley.

Another UC research team in the Central Valley, led by Kate Scow at the Russell Ranch near UC Davis, examined the long-term effects of cover cropping on organic tomatoes and corn. These researchers found that cover cropping encouraged the proliferation of diverse types of beneficial fungi known as arbuscular mycorrhizal fungi (Bender & Bowles, 2018). Under optimal environmental conditions, cover cropping was correlated with higher tomato yields. In contrast, corn did not enjoy the same benefits from organic management that the tomatoes did and had lower yields compared to fields without cover crops (Bender & Bowles, 2018). These studies have found important benefits to including cover crops in annual systems, but growers will need to further refine the practice to fit their needs.

Perennial Systems in the Central Valley

Amélie Gaudin and her team from UC Davis and UC Cooperative Extension are quantifying and communicating the benefits and tradeoffs of planting winter cover crops in almond orchards. They established trials throughout the Central Valley. Planting cover crops in almonds increases bee forage, improves soil health, and encourages resiliency. The researchers have found that cover crops resulted in increased water infiltration. Despite the common concern that cover crops would increase frost risk, they found that cover cropping did not affect ambient air temperatures 3 and 5 feet above the ground. Moreover, the ground cover worked as a buffer, keeping temperatures more stable than bare ground did (Gaudin, 2020.)

Other benefits included a decrease in sodicity, improved trafficability in the wintertime, and an increase in aggregation. The soil microbial ecosystem showed increased biomass. Bees enjoyed a more diverse, varied diet, contributing to better bee health. Finally, cover crops reduced weed diversity and growth. They did not reduce germination since both the cover crops and the weeds emerged at the same time. All these benefits start to outweigh the costs of implementation after about 10 years (Gaudin, 2020). Many of these soil and ecosystem benefits are not unique to almond orchards, and could also benefit other perennial cropping systems in the Central Valley.

UC and USDA researchers have found benefits to cover cropping in diverse agricultural systems throughout California, from almond orchards to lettuce and tomato fields. These include reducing erosion, compaction, and nutrient leaching, along with improving soil aggregation and providing habitat for beneficial insects. Cover crops may improve the soils upon which your crops depend and increase your operation’s resiliency in the face of a changing climate.

The California Department of Food and Agriculture’s Healthy Soils Program and the USDA NRCS EQIP provide incentives for planting cover crops. Check out cdfa.ca.gov/oefi/healthysoils/IncentivesProgram to learn more about the CDFA’s program. There are 10 technical assistance providers working throughout the state who can help you select your cover crop species, apply for the program, and implement your practices. Go to ciwr.ucanr.edu/Programs/ClimateSmartAg to find your closest climate smart specialist.

Gaudin, A. (2020, February 4). What do cover crops have to offer? [PowerPoint slides]. University of California Agriculture and Natural Resources. https://ucanr.edu/sites/calasa/files/319850.pdf 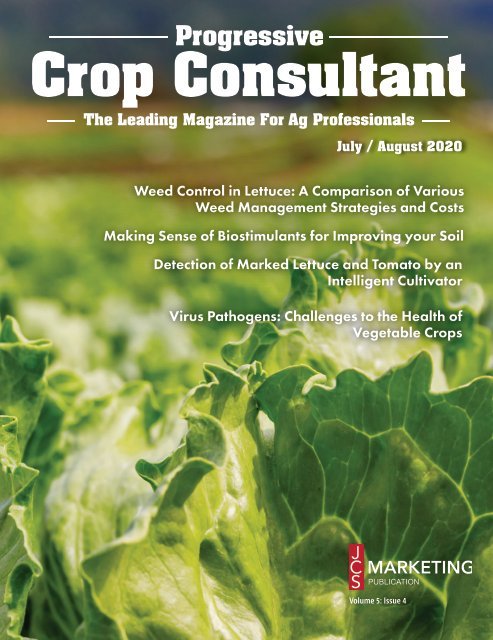 Making Sense of Biostimulants for Improving your Soil

Detection of Marked Lettuce and Tomato by an Intelligent Cultivator

Virus Pathogens: Challenges to the Health of Vegetable Crops

Cover Crops in California Agriculture: An Overview of Current Research