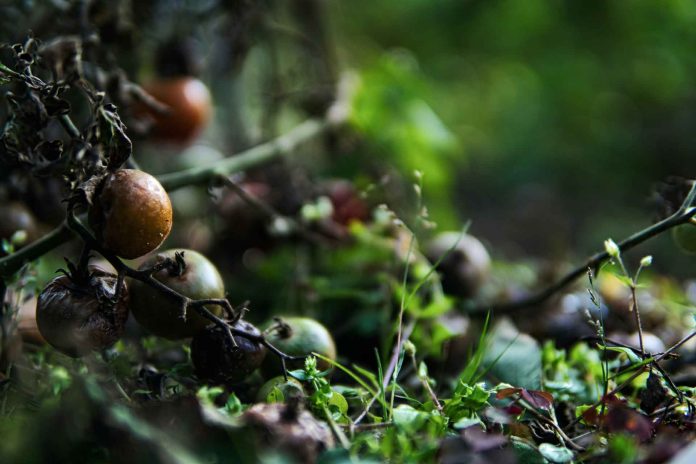 Southern blight, caused by the fungus Sclerotium rolfsii, is a destructive crown rot disease that rapidly kills tomato plants. The fungus is favored by high temperatures (over 86°F), high soil moisture, dense canopies, and frequent irrigation. Southern blight survives in soil as hardened structures called sclerotia for at least five years. Each infected plant can produce tens of thousands of sclerotia and then become more widely distributed in a field with each successive field operation. Although this disease may initially only affect a few plants in the field, southern blight can be serious enough to cause significant yield loss within a season or two. With a host range of over 500 plants, this fungus can easily persist from year to year in infected crop debris.

Southern blight misdiagnosis is likely if it occurs in an area where it has not historically been an issue, like the Sacramento Valley. It can be easily confused with other crown rotting diseases, like Fusarium crown rot. Severely affected plants can have vascular discoloration, which may be confused with Fusarium wilt. Accurate diagnosis is critical to effective control. You can distinguish southern blight in the field based on the following diagnostic traits, one or more of which may be present. Diagnosis requires looking at the soil around the crown of the plant, in addition to the plant itself.

If none of these characteristics are present, the best way to diagnose the disease is to put infected tissue in a plastic bag on a moist paper towel and leave at room temperature for one to two weeks. The southern blight fungus will produce distinct fan like growth within about 5-7 days (Figure 3). After about 5-14 days, it will make round white balls that turn into amber colored sclerotia (Figure 4). Both the fan growth and the sclerotia are unique to this fungus.

Maintaining a dry surface may help reduce losses if the fungus is detected in your field. The one advantage of drip irrigation is that the soil surface can more easily be kept dry, which inhibits infection by Sclerotium rolfsii. Avoid alternating wet and dry periods—wet followed by dry episodes can be particularly conducive to disease development.

If you have detected southern blight in your field, one of the best things you can do the following year is to plant a narrow canopy crop that you can effectively manage with fungicides to prevent sclerotia from increasing.

Rotations with non-host crops are limited because of the wide host range of the pathogen. Poor-host crops such as corn and small grains (wheat, millet, oats) can help to reduce sclerotia levels in the field.Most if not all of these crops can become infected by the fungus, but either they are not good hosts and/or the environmental conditions during the growing season are not favorable for pathogen growth. For instance, wheat can be a host, but it’s typically too cold for fungal growth during the time that wheat is grown. On the other hand, rotation with highly susceptible crops such as legumes (beans, peas and hairy vetch) can greatly increase soil infestation levels. Mustard cover crops can suppress southern blight, and may be useful for organic producers, where fumigation is not an option.

Deep plowing will bury the sclerotia and prevent it from attacking plants at the soil line. Sclerotia deeper than six inches are usually parasitized by other microbes and killed over time. Of course, plowing is not an option for fields where buried drip irrigation systems are already installed.

Sclerotia near the surface of the soil can be killed when exposed to high temperatures (105-120°F) for two to four weeks during the summer months. Solarization alone is not generally considered a viable management strategy, but when soils were solarized before the addition of biological control or a fungicide, disease was reduced by 70-100 percent compared to the same biological or chemical treatment without solarization. Make sure to prepare the soil for planting before solarizing, since cultivation and the incorporation of amendments can bring buried sclerotia back to the upper soil layers.

Southern blight is not usually  considered to be a widespread problem in California—major impacts are generally limited to Kern County. However, in 2017, late spring rains in the Sacramento Valley led to later planting dates, followed by record high temperatures, even consecutive nights where the temperature remained above 70°F. The combination of late planting dates and record high temperatures in 2017 created unusually favorable conditions for the pathogen in northern California. In 2018, we conducted a project funded by the California Tomato Research Institute to monitor southern blight prevalence in Colusa County, which had five fields with positive southern blight diagnoses in 2017. The objective of this research was to quantify southern blight spread and impact in annual rotations in the region. Sarah Light-Area Agronomy Advisor was involved in this project in addition to the authors.

Sclerotia were recovered from three fields in May 2018, possibly five fields but identification was unclear for two of the fields. The confidence level for identifying southern blight was whether the germinated growth in the trays produced sclerotia. Germination was observed in the two samples where identification was unclear, but no sclerotia were produced from these colonies. The end-of-season samples from August and September 2018 contained much higher volumes of soil than the May samples, and we recovered sclerotia from seven of the eight fields. For total number of sclerotia, five fields had increased sclerotia levels, two fields decreased, and one field had the same number of sclerotia in both the May and September samples. Southern blight increased in all three of the sunflower fields, which was expected since sunflower is a host crop. Corn fields were spread between increases, decreases, and no changes. It is worth noting though, that the only fields with decreased levels were corn fields. Also, fields where no sclerotia were recovered may contain southern blight that was not captured among our samples.

Sunflower is not recommended as a rotational crop because it is a southern blight host. Corn is likely a better choice for rotation. 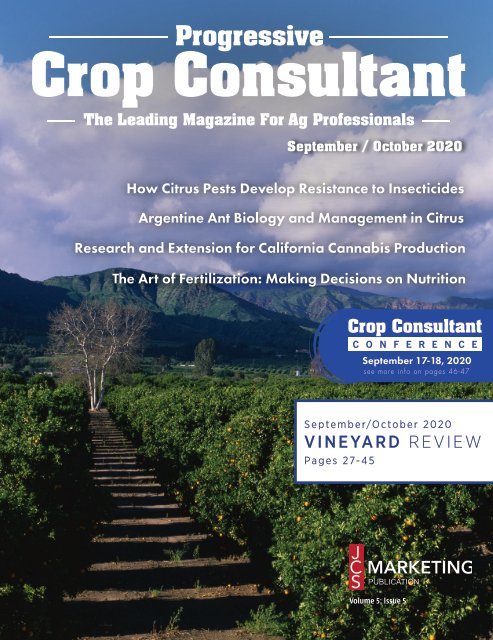